Outdoor playtime is not just reserved for kids. The fact is you’re never too old for a little fun and frolicking outdoors. Whether it’s at a campsite or a tailgate, the beach or the backyard, kids, teens and adults can all take advantage of the great outdoors, too. To ramp up the fun factor, try one of these top ten outdoor yard games. All games are great for small groups and social distancing.

This game made its claim to fame on Shark Tank, and for a very good reason. Spikeball is played with teams of two serving and hitting the ball similar to volleyball, except with a much easier set up. The game consist of a flexible, hula-hoop-sized net with foldable legs, that make it the perfect, portable game to take to the park, or the beach. The players bounce the ball off the net and towards the opposing team who then have three passes to get the ball back. When they miss, you score, and first team to get to 21 wins. Spikeball is available here.

Some folks call it Ladder Toss, but the official set is labeled Ladder Golf. It’s fun and easy entertainment for a backyard party. Each player gets three “bolas” to toss onto the ladder rungs. A bola is two golf balls tied together with rope – how can swinging that not be fun? The object of the game is to wrap your bolas around the ladder steps and possibly knock your opponents off to steal their score. It’s fun, it’s frustrating – everything you want in an outdoor game. 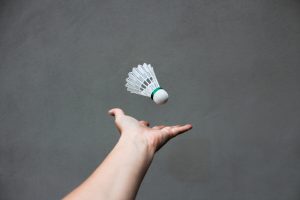 Although this game officially became an Olympic sport in 1992, badminton really is the great classic equalizer of skill and age – anyone with any skill level of any age can play. The great thing about badminton is that once you have a net, a few racquets and a shuttlecock, it can be as fun and flexible as you want.You can play with any number of people as long as you have enough racquets, and you can be as competitive as you want. Each side takes turns serving and points are scored when the opposing side missing the shuttlecock and it falls to the ground. If you want to take your badminton to the Olympic level, see the official rules here.

Create a giant twister board on your lawn with ground marking spray paint in different colors. Cut a 10-12 inch circle on a piece of cardboard and use that as a stencil to spray paint your circles. You can make as many rows of each color that you want depending on how many people will be playing. Then, you can either make a spinner like the game, or make cards with the different options – for example: Right Hand Red or Left Foot Blue. If you have teens and adults playing, make the circles bigger and further apart. For smaller kids, make smaller circles that are a little closer together. Whatever the age, Lawn Twister will bring the laughter outside!

For some strange reason, get outside and no one can resist throwing things into holes. For the best of all hole-throwing worlds, entertain your teens and adult friends outside with a combo “Corn Hole and Washer Toss set” (available for purchase on amazon.com). This set includes both classic outdoor lawn games: 3 -hole bean bag toss and 3-hole washer toss with two 26″ L x 10″ W game platforms, six 4″ square toss bags (3 red, 3 blue) and six washers (3 red, 3 blue). Just flip the platforms for your choice of bean bag toss or washer toss. 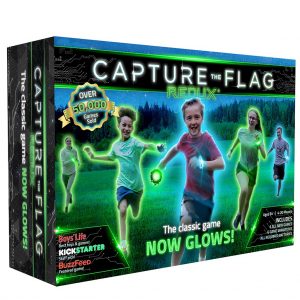 It’s the classic Capture the Flag game revolutionized with futuristic glow-in-the-dark lights! Break friends out of jail, sneak into enemy territory, protect your base and steal the glowing flag to win. Each game box includes two glowing orbs to use as the “flags,” color-coded LED bracelets to differentiate team members, glowing jail markers, and a rule-book. As an extra bonus, each kit includes 12 game variation cards that provide you with new ways to play Capture the Flag, as well as other games. It’s a great way to bring people of all ages together – kids, teens, even normally boring adults. Click here to purchase Capture the Flag REDUX.

For the ultimate backyard hangout session, The Hey! Play! Lawn Bowling Game comes with everything you need to have a ball. The set includes ten 8” solid pine wood pins, two 2.5″ wood bowling balls, and a nylon carrying case so you can take the game anywhere – backyard, beach, or park. Simply unpack the game, set up the colorful pins, and you are ready to roll.

Check out the fun here. 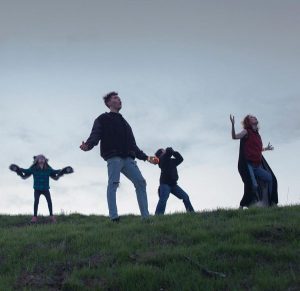 This epic, team-based game that pits two mythical forces against each other in an exciting backyard battle of speed, skill and wits. Play as a Wizard and search for glowing magic crystals. Or bare your teeth as a Werewolf and hunt down the Wizards. For 4-15 players, ages 8+. Get yours here.

When you want an eye-catching game for your next outdoor event, visit this website to choose from bigger-than-life size versions of Snakes & Ladders, Checkers, or Pick Up Sticks. This site has all sorts of games that have been super-sized so you can physically get in the fun, including jumbo wooden dice, giant chess games, supersized croquet, and huge volleyball. The motto here for outdoor fun is go big or go home.

Coming up with the top 10 outdoor games for kids is harder than finding ways to waste time indoors. The latter could be a list chosen from about 7.3 gazillion games designed to keep youngsters’ nostril prints on a smartphone screen.

Our list of outdoor games required a bit more thought. We wanted games and activities that are not only fun but actually healthy for mind and body. I’m certain that playing Fortnite 16 straight hours does not lower blood pressure, but I am sure racing through the forest in a state park has proven health benefits.

So let us look at the top 10 outdoor games for kids. This should help you run some energy off your kids for some bonus parental benefits we’ll mention at the end.

All of these outdoor games make kids more active and get them much needed sunlight. Studies show that there is a depressing feeling that creeps in when humans stay indoors too long. Those feelings increase with too much time in front of glowing screens.

The extra benefit to parents from all these outdoor kid games is the energy burn off factor. Little Johnny will go to bed easier if he spent six hours ducking speeding dodgeballs or hiking over a small mountain to find a buried geocache treasure box.

Your kiddos will also have less desire to argue with each other in the evening. They will have used up that energy in some competitive fun during the day.

To see the best outdoor glow in the dark games for kids, teens and adults, visit the Starlux Games Online Store.

Four Square
This simple game from your grade school years is remarkably simple but can supply endless fun. All you need is a bouncy ball, a hard surface away from cars or anything that can hurt players or be damaged by a flying ball, and some street chalk to make four squares. I won’t bore you with the rules, but this four-player game can be played with large groups. When someone gets out, have someone cycle in to the fourth, or D, position. Add more interest by giving the person in the top square the ability to make rules up if they’ve held that spot for five rounds in a row.

Red Rover
You will be surprised at how fun two rows of people holding hands can be! The game is best played when you rotate kids with adults, or purposefully put two kids together to give those on the other team a better chance at breaking through somewhere.

Giants, Wizards, and Elves
We at Starlux Games love different versions of paper, rock, scissors. This one is a hilarious, fun games for all ages.

Divide the group into two team, who all play the same action at the same time. They have three choices. Giants stand on their toes, raise their arms high and make giant noises. Wizards crouch a little, like an old magician, wave their fingers like they are casting a spell, and say something like “Shazaam!” Elves crouch lowly, cup their hands over their ears and make a high-pitched noise like “Eeee!”

The winners grab the losers and pull them to their side. The losers try to get behind the safe zone behind them. Giants beat elves (squish!), elves beat wizards (those wily folk), wizards beat giants (zap!).