It was a dark, cold and snowy evening. Does that sound like the start of a thrilling novel or like a long winter season home with your kids and stuck inside. Just because it’s snowy and cold out, doesn’t mean your kids can’t get outside for some active playtime. Don’t hate the wintery weather yet, just be prepared to bundle up your kids and gather supplies for fun outside winter activities. And, even if the days are shorter and it gets darker earlier, you can still find ways to incorporate some glowing ideas to brighten your winter evenings.

Kids and teens of all ages love things that glow in the dark and findings things that glow in the snow is really cool and makes playing outside when it gets dark earlier so exciting. Be prepared for dark, winter evenings with some glowing components like glow sticks, neon paint and glow in the dark games. And, the next time the flakes start falling, pull out these fun ideas for outdoor winter games and activities that can get your kids out of the house and have you actually looking forward to the winter months.

A yard full of snow is like a blank white canvas just waiting to be painted. Pick up some neon paint and empty squirt bottles at the craft store and be ready for some snow day fun with an easy recipe for glow paint. Add one teaspoon of the neon paint to each squirt bottle and fill the rest with very warm water. Close up the bottles tightly and then shake them up until all of the paint is dissolved. You and your kids are now ready to paint and create glowing works of art on any snowy surface. For extra excitement, use a black light to reveal an even brighter glow. You can even bring some snow indoors in a plastic bin to make glowing rainbow snow with the neon paint.

Once it’s dark and snowy out, you won’t believe how much fun glow sticks can be. Purchase them in bulk for mini treasure hunts and snow day activities. All ages will love to dig in the snow for the glowing treasures. Hide them in snowy flower pots, on snow-filled sidewalks and some in deeper snow drifts. You can use them to make snow-glow stick art patterns or tic tac toe boards in the snow. Playing with glow sticks in the snow will keep your kids busy and active outside and brighten up a dark, snowy evening.

A snowy playing field can turn an old game into a new and exciting one. So, why not get out and play lawn games even when there is snow on the ground. Glow in the dark balls make flag football, wiffle ball and volleyball a winning winter wonderland. And, you can find glow-in-the-dark sets for corn hole, ring toss and lawn darts at Amazon and other major retailers. You can even make your own glowing lawn games with some fluorescent paint. Snow bocce and snow croquet suddenly become snocce and snoquet!

And, some games like Capture the Flag REDUX are made for glow in the dark nighttime fun even in the snow. It’s the classic Capture the Flag game revolutionized with futuristic glow in the dark lights. Set the glowing jail markers on a snowy playing field and watch as players break teammates out of jail, sneak into enemy territory, protect base and steal the glowing flag to win. Each game box includes two glowing orbs to use as the “flags,” (see photo below) color-coded LED bracelets to differentiate team members, glowing jail markers, and a rulebook. Teams can even make snow forts as part of their territory or hide the glowing flag in the snow drifts. You can purchase Capture the Flag REDUX here. 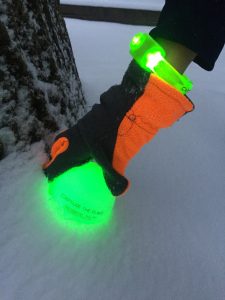 The thrill of tubing and sledding can only get better by adding some glowing elements. Grab some neon paint or glow sticks before you hit the hills and slopes in your neighborhood. Use the paint to outline a tubing course with swerves and curves. Add the glow sticks to your tubes and sleds as well as on your kids’ coats or boots. Not only will the glow make the winter sports more exciting, it will also keep your children safer by making them more visible to other sledders.

When the snow gets deep enough, it’s the perfect time to freak out your neighbors with some creepy glowing snow creatures. Get creative and get glowing. Help your kids shape snowmen, snow women, snow animals or any kind of creatures and then use the neon snow paint to make really colorful characters. If you don’t want to break out the neon paint, then you can just make crazy creatures out of big lumps of snow and then use glow sticks for their eyes for a creepy effect.

Kids and teens love to battle in the snow and the there is no reason that you can’t battle after the sun goes down. Plan a glow ball fight by mixing some of the neon paint with snow to make fluorescent snow balls. Or, you can insert mini glow sticks into the snowballs and launch them. You can also use a Glow Battle kit to play a number of battle games in the snow. Just find an open snowy space and break out the swords of light. It’s easy to set up and simple to play. Identify your teams with different colored glowing bracelets. Then, use strategy, teamwork, and warrior instincts to team up and take down your opponent. Use the harmless, glowing batons to attack your opponent, and send them running back to their base to “recharge” before they get hit again. Glowing snow battles are a great way to teach your kids strategy, encourage social interaction and keep your kids active in the long winter months.

Do you know of any other fun glow in the dark games to play in the snow when it is dark outside? If yes, please let us know in the comment section below.