Let’s Split Up – The Origin Story 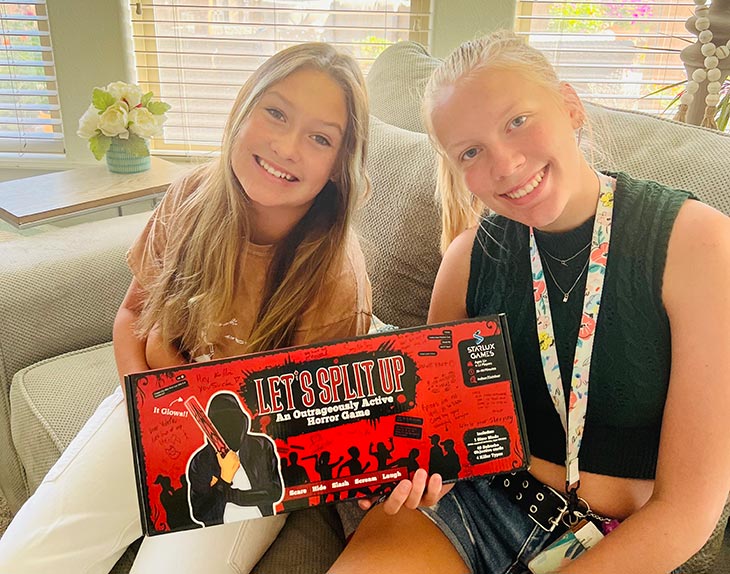 What do 16 year-old girls and horror movies have in common? Lots!

Or at least that’s what our experience at Starlux Games indicates. “We were in the midst of play testing our current Glow Battle game,” says Judd King, founder of Starlux Games, “When one of play testers said, ‘You should make a Michael Myers game. You know, where one player hunts down the other players!’”

Who is this play tester? And why did she suggest modeling a game after a renowned (fictional) killer?

Her name is Ella Gneiting. She’s a sixteen-year-old high school student from Lindon, Utah. “We play this game where one person is Michael Myers from the movie Halloween, and the rest of us are just regular people,” she explained. “We have a safe spot, but we try and get this one object. So you have to try and not get tagged or else you die.”

“I loved the concept immediately,” King says. “We’ve had multiple retail partners and customers tell us that they wish they had more game for teenagers and I thought, teens love horror movies, why not create one inspired by an actual player?” He also recognized that there is powerful need for active and interesting things for teens to do.

To amp it up, to further link it with the horror genre and to make it even more adrenaline pumping, he added horror tasks. Actions for the non-killers (called “Suburbos”) range from creating a dummy to mislead the killer to recording a video apologizing to your parents for all the bad things you’ve done. The killer fulfills absurd antics as well: smelling another player, reciting a 1-minute monolog about the wrong done to them in life, even chasing a player on all fours!

The results? “It’s really fun, especially for teenagers because you can make it creepy,” says Ella after she tested the new version of the game.

“Even though it was originally geared towards teens, it’s really a game that all ages and combinations of ages can play,” says King. “Slumber parties are a great place because they are already watching scary movies, so this gives them a chance to kind of be in one.”

He adds that it can be played at family gatherings, like during the holidays, to drive intergenerational interaction. He joked, “Who doesn’t want to see Grandma as the killer?”

Let’s leave you with that thought: Who wouldn’t have fun playing Let’s Split Up with their Grandma as the killer?