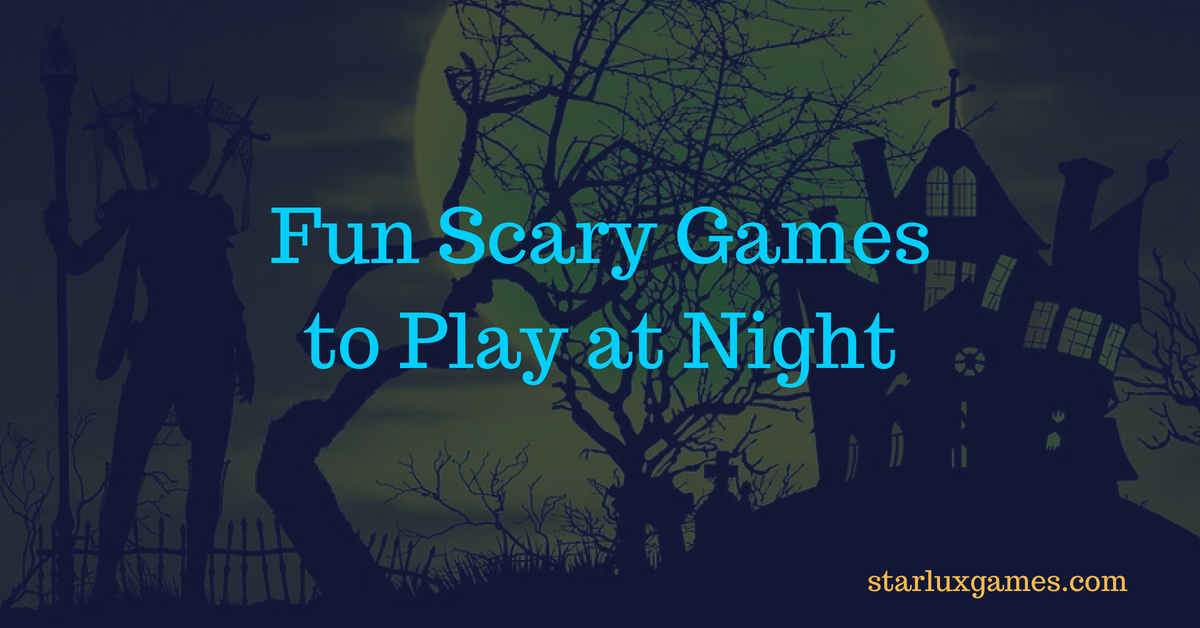 The sun goes down, the screens come out and parents need some fun scary games to play at night to keep their kids entertained and off of their phones.

With all of the hype surrounding mystery, spookiness, and thrill-seeking in today’s pop culture, these games are the perfect way to really engage your kids, capture their attention, and give them new reasons to get outside and get active. Too often, after it gets dark outside, kids, especially teens, turn to their screens.

With these games, you can encourage physical activity, move them away from their screens, and give them a thrilling way to have nighttime fun.

1. GHOST IN THE GRAVEYARD

This game is an absolute neighborhood classic. Once the sun goes down, and your kids are looking for a way to take part in some spooky fun, bust out the flashlights and send them outside.

This game is so easy to play and only requires as many flashlights as there are players. One player is the “ghost” and he or she hides in the yard while the others look for them with the flashlights. The player that finds the ghost yells, “Ghost in the graveyard!” and all of the other players have to scramble back to the base before the ghost can tag them. Whoever is tagged is the ghost the next round. This is an inexpensive, easy way to keep your kids active in the evenings.

There is no better way to get your kids off of the couch after the sun goes down than this glowing version of the classic Capture the Flag game. Split into two teams and hunt for the glowing “flags” which are light-up orbs, distinguish your teammates from opponents using LED bracelets, mark your boundaries with futuristic lights, and lock your opponents in jail with glowing jail markers.

This game is perfect for kids of all ages and is the perfect way to entertain them when it starts to get dark outside. The set comes with all the mentioned glowing gear, a rule-book and 12 game variation cards with eerie characters like Werewolves, Wizards and Ghouls. This exciting glow in the dark game is available for purchase here.

Much like Ghost in the Graveyard, this game is easy to play, inexpensive, and so much spine-chilling fun. A new twist on the classic “sardines” game, this scary game to play at night also features players using flashlights to find someone, but this time, instead of running away from the person who is “it,” they hide with them.

Every player that finds the hidden person turns out their flashlight and hides with them until there’s only one player left. As you can imagine, this game can seem pretty creepy as you notice fewer and fewer flashlights on around you. This is a great game for big or small groups and is easy to set up for parties as well.

This light-up battle game is an awesome way to get some energy out of your kids as the sun goes down and is much more fun than staring at a screen.

Players use strategy, teamwork, and their own warrior instincts to team up and take down their opponent. Teams are distinguished with light-up bracelets that also serve as the target for opponents.

Using harmless, glowing foam swords, attack your opponent, hit their bracelet, and send them running back to their base to “recharge” before they get hit again. This game incorporates activity with strategy, and futuristic lights make the game eerie when you play in the dark, either indoors or outdoors! Glow Battle is available for purchase here.

These cool laser tag guns bring the arena right into your very own home or backyard.

These guns have a range of 130 feet indoors and outdoors. They are perfect for chilling nighttime play with glowing side panels and cool infrared laser readers.

They feature a speaker, life bar, team selector, and trigger and reload buttons making the game-play intense. You can also change the mode on your gun that switches the amount of shots you have before reload or the damage that you can do to your opponent. Imagine the thrill you’ll get tagging your opponent as you come around the corner! This game is available at amazon.com.

This game is perfect…if you’re not scared of the dark. Play in a dark or pitch black room (depending on the age of the players).

One person wields a flashlight, turned off, while the rest of the players spread out across the yard or room. When the person holding the flashlight counts to a certain number or says “Ready,” the rest of the players freeze in place, becoming spooky statues. The person who is “it” them turns the flashlight on and shines it around looking for the other players. When the beam lands on a player, the person who is it has to do a fake scream, trying to get the player to move or break from their statue-like stance. The first person to break is it the next round. This is a great game for dark nights outside and those looking for a good scare!

This classic game is an undeniably fun way to have a blast and also instill some thrill into your summer nights.

Players go around hiding from the person shining their flashlight but when the beam catches them, the flashlight switches hands, and they are it. There are several fun variations to play this game. For example, you can either play that each player has a flashlight which is turned on and play by the regular rules of tag, or divide into teams and play freeze tag, trying to freeze as many players as you can on the other team until there’s only one team left standing. Regardless, this thrilling nighttime game is a great way for kids to stay active and get a little spooked.

Do you know of any fun yet spooky games to play at night? If yes, please tell us below in the comments section.

If you’re looking for super fun glow games, check out our online store.

Tags: games to play at night, scary games for kids