Capture the Flag Game Strategies For Winning Every Time 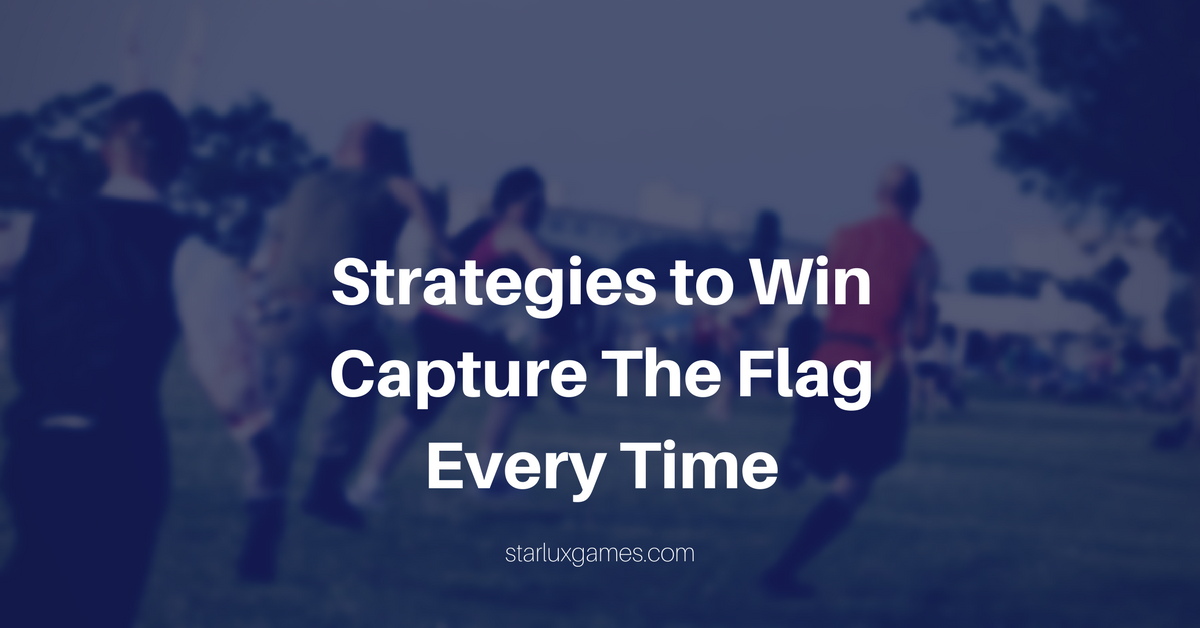 It feels pretty great when your team wins a game of Capture the Flag. Not only did you defeat the enemy team in a fun game based on speed and agility, you outwitted them too! That’s why this game has been so popular over the years. Brains and muscles combine for hours of fun competition.

If you do not know how to play this great game, here is an article we wrote on how to play Capture the Flag.

There are many variations of Capture the Flag. It has been around for years as an outdoor game. And in recent years it has been incorporated into online video games like Overwatch and Call of Duty. An exciting glow in the dark version of Capture the Flag is also available by us here at Starlux Games.

We are going to lay out five strategies for winning at Capture the Flag in the real world outdoors. But for you online gamers, here are a few tips:

Now, here are our top five strategies for winning when you play our versions of CTF in our original nighttime game or in our newest game, Glow Battle. We’ll also toss in some tactics that you should not attempt.

5. You probably won’t win very many Capture the Flag contests with an undisciplined team. Do you think the New England Patriots would win so much if their offense let any player be the quarterback? Ridiculous right? Every team needs to have its players know their role. A team needs some guards to protect their own flag. And some attackers are needed to go after the flag in possession of the enemy.

With defined roles, your team won’t risk leaving your flag unprotected. Faster players will make for better attackers and slower ones will make for better guards. Each role is just as crucial as the other though. A team wins the game, not a single player. Tom Brady is the right QB for the Patriots, but his team wins as a unit, not as individuals.

4. It sounds like a simple thing, placing the enemy flag on the best spot on your side of the field. Most of the time teams will put it as far away as possible at the edge of their territory. But your team should give thought as to whether there is a better spot. Maybe it would be easier to guard the flag if it were closer to the middle of your territory. It’s possible that your team could take fewer chances and keep an eye on the enemy better by placing the flag closer to the middle ground.

It’s crucial to pay attention to how your rival team is attacking if you play multiple games. If you’re losing consistently then why not change up the location of your flag? Doing the same thing over and over while expecting different results is the definition of insanity. Some would say playing video games for 19 hours straight defines insanity pretty accurately too!

3. Have you ever noticed football teams with great offenses tend to win a lot of games but often lose in the championship game? It’s true more often than not. There’s something about a fast-paced offense that does well consistently but loses when confronted with a patient defense. So your team can choose to attack aggressively to win a Capture the Flag contest. And you’ll likely win many games if you have speedy players able to dodge the enemy team.

But if you’re in a tournament you may wind up defeated in the end by a team that focuses on defense. In tournament situations, it would be wise to mix in a patient defensive strategy with an opportunistic offense to keep the other team off balance.

2. Use your best player as a decoy. If you have the fastest player on the field, you have a big advantage. But use him or her wisely. Just sending the speedster straight after the flag at the start of the game will get them knocked out of the contest early since the other team still has all of their players defending.

Instead of risking your best player in a direct attack, send them near the flag, then let them lure the defenders away from the flag. Your one player could occupy 3-4 enemy players as they try to catch your version of “The Flash.” This should make it easier for your remaining attackers to make a run for the flag.

*One tactic that won’t work – sending a herd of players bunched up in a barbaric attack on the flag. You might get a rush of adrenaline for a few seconds, but your team will get picked off easily as they are too close to each other.

1. “All warfare is based on deception.” –The Art of War. Pretty solid advice from the ancient Chinese war manual. To Capture the Flag and win bragging rights, you will need to outwit the opponents. Use trickery, distractions, and maybe allusions if you happen to have a magician on your team.

Telling “yo mama” jokes probably won’t be effective unless you use it on a hot-head. Not a good idea as you could end up captured in a headlock! Your team is better off using these deceptions to win the game:

All you need to do now is use these top five Capture the Flag strategies the next time you get a chance to play. Winning these games takes planning and creativity. You won’t win every time by using the same old tactics again and again. Mix it up in order for your team to dominate.

We all want to win in any competition. But Capture the Flag is one of those games that makes you smarter, more aware, and improves your endurance even when you don’t win. Experience is a powerful teacher, and in this case – a fun one.

* The featured image used in this post is by Kadena Air Base and can be downloaded at http://www.kadena.af.mil/News/Photos/igphoto/2000151764/