THINK OUTSIDE THE (BOARDGAME) BOX 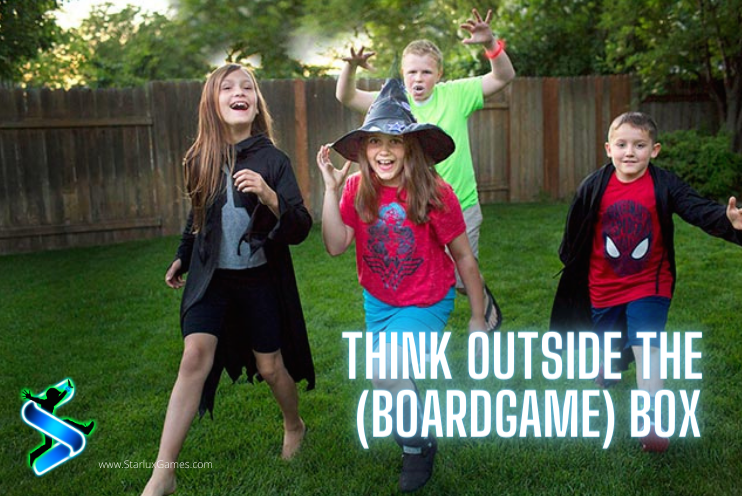 Give your imagination a workout by stepping out of the (boardgame) box.

It was a dark and blustery night. The branches eerily rustled in the wind as the clouds reluctantly shifted, revealing bursts of silver from the full moon overhead. Noah reached into the hollow of an ancient scrub oak tree to remove a glowing gem that brilliantly reflected the beams from above. He waved frantically towards his sister, but then he heard them coming. His stomach dropped as he heard footsteps running faster and faster toward him. He raced for the safety of a nearby clump of trees, his heart pounding with excitement. Was this really happening, he thought, or was he merely a pawn in their intense game?

What if the next game box you opened allowed you to not only hold a game piece, but to actively be the game piece. In addition to all of the benefits you get from traditional game play like strategy and teamwork, active group games have the added benefits of encouraging physical activity and nurturing imagination. If you love opening a new game box, unwrapping the game pieces, digesting the rules and mastering the game, think about the excitement you would get going one step further…being a part of the game outside of the box.

Adding active games like Vikings of the Northern Lights or Capture the Flag REDUX to your is a great way for you to expand your family game nights in a healthy, active way. Studies show that being outdoors and active can improve both mental and physical health. Plus, with most sports activities and group gatherings postponed for the time being, what better way to get out the wiggles than to run around the backyard in friendly competition!

Take a step out of that boardgame box. You may be surprised at what you find.