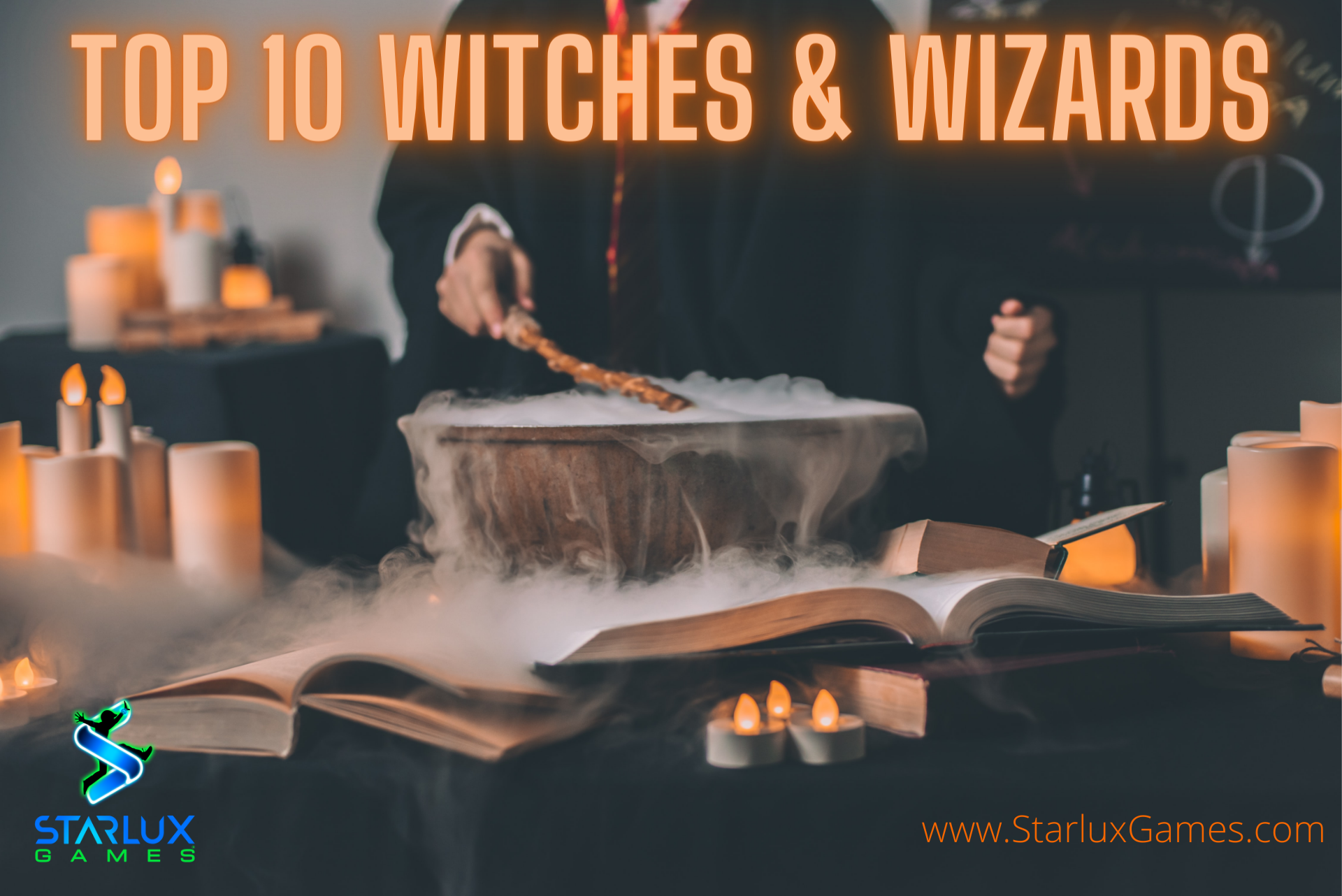 Can you feel the magic in the air? With Halloween getting closer, it’s hard to resist the urge to throw on our pointiest hat, whip out our wands, and bust out our broomsticks like our favorite witches and wizards! Some are clever, some are cool, and some are just plain creepy. Witch-ever is your favorite, it’s easy to spell-out why October is the season of the witch!

WICKED WITCH OF THE WEST

Hold onto your hats and your little dog too because we’re starting with one of the classic witches! Since 1900, the Wizard of Oz’s Wicked Witch of the West has turned us all into cowardly lions with her gruesomely green complexion, high-pitched squeal, and nightmarish flying-monkeys. For better or warts, this iconic villain has become a fixture in pop culture history. Whether you’ve read the books, watched the movies, or experienced her softer side on Broadway, this clever crone has melted our hearts in addition to…melting.

Keeping up with the classics, we have to mention our favorite wand-ering wizard, Lord of the Rings’ Gandalf. His great power, wisdom, and leadership has taught us to never give up on our quest, no matter what dangers lie ahead. If only we all had mentors like Gandalf to guide us during our darkest witching-hours.

If you love teen drama, amazing character development, and killer action sequences, chances are that Buffy the Vampire Slayer has played a huge role in your life. And even though Buffy is the supernatural star, we can’t help but relate to the endearingly awkward Willow. Nothing is better than watching Willow come into her own as the most powerful witch in Sunnydale. Although she sometimes dabbles too much in that ol’ black magic, Willow always comes through in the end. And for that, we will always be under her spell.

Who doesn’t remember watching Looney Tunes on a Saturday morning and trying to mimic her famous cackle? And who else learned just how painful that was for the vocal cords? That just goes to show you that the wand-erful Witch Hazel is an inspiration to us all. From her voice to her look to her mischievous schemes, Witch Hazel conjures up the perfect image of the cartoon witch.

Sabrina Spellman is one of those witches who really knows how to brew up nostalgia. Whether you know her as a cute cartoon in the Archie Comics, a sassy sitcom star in Sabrina the Teenage Witch, or a serious scream queen in the Chilling Adventures of Sabrina, she is the kind of friend that would make any ghoul-squad complete. And if you have trouble deciding which Sabrina is your favorite, her feisty feline Salem will always feel familiar.

Here’s a warlock who really knows how to possess the cultural zeitgeist for hundreds of years. There are so many legends around him that no matter how many times you brush up on Medieval history or rewatch The Sword in the Stone, you may never unlock the full mystery behind this shape-shifting super-sorcerer. But no matter how mysterious, Merlin’s love of Camelot and loyalty to King Arthur has always left us charmed.

The Voodoo Queen herself! A mainstay in New Orleans lore, Marie Laveau allegedly worked as a hairstylist and gathered many secrets about the elite of New Orleans from her clientele. She would then approach people on the street and know everything about them despite having never met them before. She was a seasoned Voodoo practitioner who also was a prominent community figure. Over time, her reputation continued to grow, and she remains a huge figure in New Orleans culture to this day. You may recognize her from American Horror Story, where she was played by the indomitable Angela Bassett.

If fantasy role-playing is your thing, then you know all about Elminster from the Forgotten Realms campaign setting and novels for Dungeons and Dragons. Witty and wise, Elminster is a natural storyteller whose chaotic goodness creates excitement and intrigue wherever he goes. Known as the Sage of Shadowdale, Elminster is of curse the kind of warlock you want on your side.

They’ve put a spell on us and now we’re theirs! Since 1993, Hocus Pocus’ Sanderson Sisters have made us root for the villains. With their relatable sibling rivalry, hilarious antics, and killer harmonies (Bette Midler, c’mon!), we almost want Hocus Pocus to be a hags to riches story rather than end with their demise. Well almost…they were pretty evil witches. Regardless, these iconic ladies have proven to be three of our favorite Hallo-queens and will continue to inspire group costumes for generations.

It goes without saying that Dumbledore is not only one of the best wizards of all time, but he is an amazing influence on millions of Harry Potter fans. Whenever we felt like we’ve gotten the short-end of the broomstick, Dumbledore made us feel like we could overcome anything. Even though he proved to be a more complicated hero in the end, we will always be thankful for the expert advice he imparted on us: be kind, always fight for the greater good, and “one can never have enough socks.”

With Howl-O-Ween around the corner, we can finally unleash our inner-magic with an epic glow-in-the-dark game that brings fantasy to life! A combination of hide-and-seek, tag, and scavenger hunts, Wizards and Werewolves is a team-based game that brings two mythic forces together for a backyard battle of strategy, speed, and skill. Wizards and Witches use their wits to search for the glowing crystals and stop the hunting Werewolves from taking over the yard! Available here, the game comes with 12 light-up game pieces and offers three levels of play, ranging from easy-to-play for beginners to highly strategic for advanced game play. Be your own favorite witch or wizard with Wizards and Werewolves!