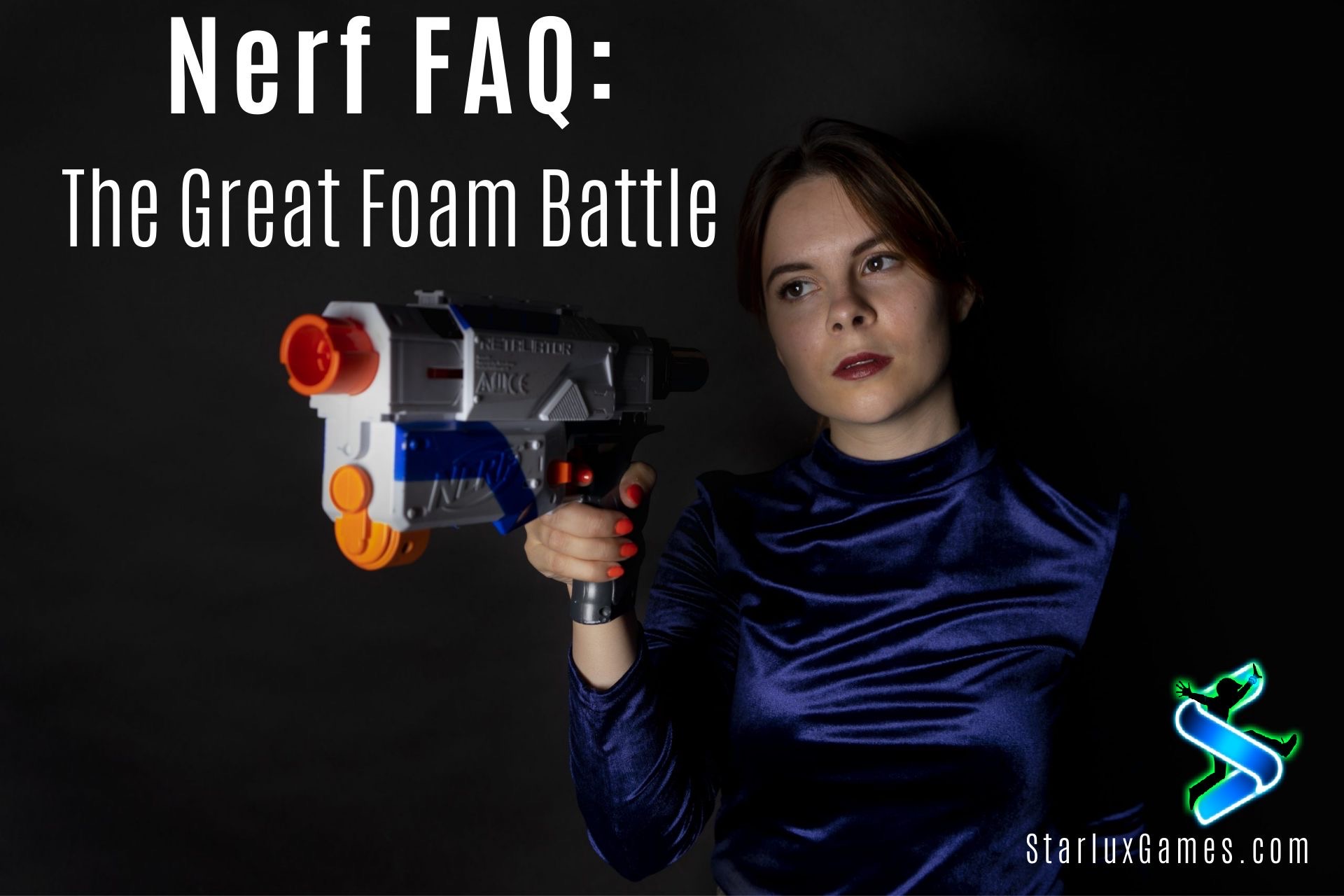 Everything You Need to Know About Nerf and Other Foam Weaponry

Did you know that enough Nerf darts have been sold over the last five years to circle our planet four times around? The count is somewhere over 4 billion darts since the inception of the product. Yes, seriously, someone did the math. If you are a parent, you may feel like you’ve picked up that same number of foam darts off of your living room floor or in your kids’ play area. What is the crazy attraction that kids have to these foam fighting toys? Here is the low-down on Nerf guns, darts, bullets and other harmless foam-based weaponry.

What Does Nerf Stand For?

Nerf is a brand of toys and guns that was created by Parker Brothers and is owned by the worldwide toy company, Hasbro. Sources say that NERF™ may be an acronym for “Non-Expanding Recreational Foam” or may have been created as a backronym after the toys came into existence. Although Nerf products started with sports balls (most notably the American football) the majority of the toys now are the foam-based guns. These guns, referred to as blasters, shoot ammunition including darts and balls made from Nerf foam. These foam-based weapons have taken today’s generation by storm. While it’s fun to toss around a Nerf football, shooting your friends with an arsenal of foam balls is a whole new level of excitement.

The foam-based universe has now expanded to include games with glowing swords, axes and the like. Whatever your kid (or you!) are looking for, it’s out there.

What Are The Best Nerf Products?

Apparently, there is a Nerf gun line for every type of personality. Currently, there are 18 lines of different Nerf blasters. They include: N-Strike Elite, Alien Menace, Dart Tag, Vortex, Zombie Strike, and many, MANY more.

There are also Nerf alternatives that use similarly harmless weapons but offer different modes of play.  Take Glow Battle for instance.  Rather than use guns, players battle each other using glowing foam swords.

Based on several review sites, here’s the low down on the best foam weapon products:

Yes! If you’re purchasing a nerf shooter, you’ll need to know some basic info about the different sizes. Nerf nerds may know that there are a variety of specific nerf bullets and darts to load in your weapons. For the Nerf novice, we will start with the three main types of Nerf darts.

Psst… If you’re sick and tired of picking up Nerf darts, stepping on them in the middle of the night or extracting them from your vacuum, Glow Battle is your new best friend. With a few swords instead of a hundred darts, clean up could not be easier. And yes, we admit it: we have a vested reason for telling you about Glow Battle: we produce it!

Generally speaking, Nerf toys are fairly safe, though the Nerf guns should cause a bit more pause than other types of foam toys. You should always read the manufacturer’s recommendations and guidelines. Most Nerf toys are designed for children ages 8 and up, with a few models specifically made for older children, so be sure to purchase accordingly. Adult supervision is also recommended during play. Plus, there are few precautions to take that will help you avoid accidental injuries during a Nerf battle. These include:

What Are The Best Nerf Alternatives?

So what is a parent to do if their kids want the thrill of battle, but you are hesitant about introducing guns into their world? Or maybe as a parent, you worry about the projectile-type injuries that could possibly come with foam blasters? Well, there are a variety of other harmless foam based weaponry that will satisfy your youngsters’ thirst for strategy and competition without encouraging them to point guns at each other. Our personal favorite, of course is:

Glow Battle is the epic foam-based battle game for 2 to 10 players. Players use harmless glowing foam batons to strategize and take down their opponents. First, identify your teams with the included different colored LED bracelets. Then, use strategy, teamwork, and your own warrior instincts to team up and attack your opponent, and send them running back to their base to “recharge” before they get hit again. It’s a great way to keep your kids active, teach them strategy and encourage social interaction. Physical activity becomes part of the fun as players run, jump and swing at each other to win. Each game box comes with 10 weapons, 10 glowing wristbands, 8 regeneration station markers and 10 game playing cards with different game variations.