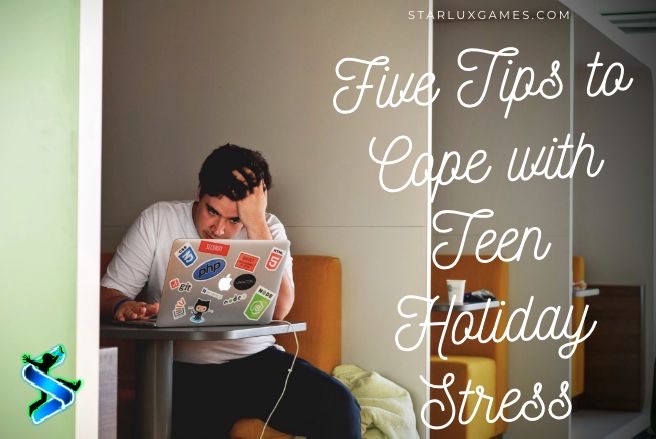 When most people think about holiday stress, they envision people fighting to shop in crazy retail store sales or struggling to put toys together at the stroke of midnight on Christmas Eve, or even hoards of people stressed by holiday parties and spending overload. They don’t realize that the holidays can be an extremely stressful time for teenagers as well. Here are just some of the factors that lead to teen holiday stress:

Studies show that teens need eight to ten hours of sleep nightly, but most don’t get it – especially during the busy holiday season. In fact, two out of every three teens is sleep deprived, and that’s just not healthy. Teens need good sleep habits to perform their best when they are awake and to manage the stress that comes with being a teenager. Sleep is like fuel for their growing brains and their bodies. Try to encourage your teenager to get as close to eight hours of sleep each night as possible and to stick to a bedtime routine that involves going to sleep around the same time each night and winding down an hour or so before bed.

Regular physical activity can also improve the quality of their nighttime sleep and increase sleep duration. Exercising outdoors reduces stress which leads to better shut-eye and better health overall. Encourage your teens to get out and walk, bike or play active games. If you’re looking for inspiration, check out Capture the Flag REDUX from Starlux Games. It’s the classic Capture the Flag game revolutionized with futuristic glow-in-the-dark lights, and it’s a great way to get teens moving as they break teammates out of jail, sneak into enemy territory, protect base and steal the glowing flag to win. Plus, you can still play it outside even with shorter daylight hours!

As mentioned above, exercise is a great way to reduce stress! There is no end to the benefits of physical activity for kids and teens. It builds strong bones and muscles, helps maintain a healthy weight, improves strength, coordination and endurance, plus it promotes emotional well being. But, as you probably know, teenagers can get bored doing the same type of activity Every. Single. Day. It’s up to you, as the parent, to offer them a variety of choices that are fun and age-appropriate. The best way to encourage your teens to get active is to be a good role model when it comes to physical activity and join in with them on their exercise endeavors. Not only will you get to spend valuable time together, you’ll also stay healthier in the process.

This holiday season, look for a variety of games to play with your teens are active AND exciting. One such game? Glow Battle! Players use harmless, glow-in-the-dark batons to team up and thwack their opponents then send them running back to their base to “recharge” before they get hit again. Teams are distinguished with light-up bracelets and bases are marked with LED lights. Play inside or out – it’s easy to set up and way better than staring at a screen.

Hey: It’s the standby recommendation for a reason. Teens won’t always choose the healthiest food on earth, so there’s always room for a few upgrades. Because holiday parties and crazy schedules can wreak havoc on any diet (teen and adult!), a few small changes could make a difference in their mood and general well-being. Encourage them to add some protein to their meals or choose a fruit for their snacks. For example, you could persuade them to add a yogurt to their usual bowl of sugary cereal or cut the chips in half and add some grapes or carrots to their lunch box. Lean protein, fresh fruits and vegetables, and plenty of water can help regulate their mood. Taking good care of your body through diet, sleep and exercise can help teens combat stress and keep it from becoming a serious prolonged problem.

That party they’re asking to go to just might be good for them! Research shows that social interaction in teen years is important for both physical health and mental well-being. Social relationships help teens cope with the stress and pressure of teenage life. Encourage your teens’ friendships, and help them find activities over the holiday break that involve putting down their phones and connecting with these friends.

Is your teen a fantasy fanatic? Try Wizards & Werewolves! This epic glow-in-the-dark game pits two mythical forces against each other in an exciting backyard battle of speed, skill and wits. This game is sure to be a huge holiday hit for teens as werewolves howl, hide crystals and hunt wizards, while the wizards use their mystical powers to avoid the werewolves and destroy the dark side.

5. PUT DOWN THE SCREENS

This one is good for teens AND you. Over holiday break, unplug and get outdoors to restore mental energy and regulate moods. By now it’s confirmed: Teens who spend less time in front of screens are happier. Set some guidelines for screen time with your teens and be a good role model when it comes to screen use. And, as you’re searching for cool teen gifts this holiday season, look for ones that encourage your kids to be active, play outside, and interact with others while having fun. You just might be surprised at how much holiday-break excitement that you can conjure up  with the right screen-free gift. Help create good habits now to reduce teen holiday stress and embrace a lifetime of improved sleep, better health and well-being and overall happiness.