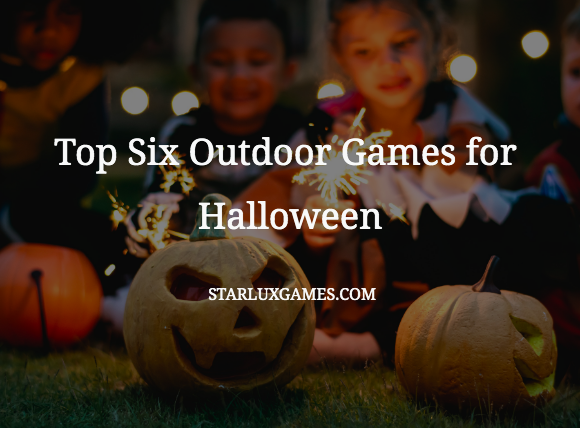 As Halloween creeps closer, parents and party hosts are searching for games and activities that are thrilling and chilling for their haunted holiday happenings. If you’re planning a Halloween party that will be an outdoor event, you can make it even more exciting with glowing games and spooky themed activities. Because once the sun goes down, the ghouls and goblins will come out, and the thought of entertaining them at your house may be the scariest thing of all. Don’t fear, there are many fun ways to keep your party goers outside, active and engaged. Plan ahead for outdoor Halloween fun with these six spine-chilling games.

Get the pulses racing at your Halloween party with this backyard race to mummify your friends. The best part is that you probably have the supplies for this game already on hand. Mummy Run is a thrilling way to get your party goers active and laughing, and all you need are several packages of toilet paper.

Start by dividing your group into pairs and giving one player on each team a roll of toilet paper. Then, divide the pairs and have the player with the roll stand across the playing field from his or her partner. At “go” the players with the toilet paper race down to the other end and start to wrap up their partners like a mummy in toilet paper. They must wrap their body and every limb completely from head to toe. Then the “mummies” must run back across the field to the finish line. It will be a race to see which team finishes first, and then everyone can relax and unwind.

2. GLOWING GHOSTS IN THE GRAVEYARD.

Halloween is the perfect time of year for backyard games and this one is a creepy favorite once the sun sets. Available here, this is one of the twelve game variations for the Capture the Flag REDUX game. In addition to game variation cards, the game box includes glowing orbs, LED bracelets, territory lights and boundary markers that you can use for Ghosts in the Graveyard.

To start, choose a haunted (but safe) playing field and mark the boundaries using the included territory lights and blue jail markers. Then use the green jail markers to designate a Safe House. Choose up to four players to be “ghosts,” and the remainders are “the living” and wear the enclosed lit bracelets. The ghosts then hide while the living count in the Safe House. After they count “one o’clock, two o’clock…” all the way to midnight, they hunt for the ghosts. The first player to find one of the ghosts yells, “Ghost in the graveyard!” When all of the other players hear this, they start to race back to the Safe House before the ghosts can tag them. The tagged players become ghosts for the next round.

There is nothing like a supply of gory eyeballs to gross out your Halloween party guests, even if they are just made from plastic. Having an eyeball spoon race is like playing a traditional egg on a spoon race, except you replace the egg on the spoon with an eyeball. You can find plastic eyeballs at the dollar store, paint ping-pong balls to look like eyeballs, or you can purchase an Eyeball Spoon Relay Race set at Amazon or other major retailers.

To begin, divide your group in two and have relay races to see who can balance their eyeball on the spoon without touching it. The first player on each team places their plastic eyeball on the spoon and races from one end of the field and back. If the eyeball falls, they must stand in place for a count of five before they pick it up and start again. When they get back to the start line, they pass it off to the next player on their team until everyone has gone. The first team with every player to finish wins.

This eerie game is sure to awaken the dead and get your Halloween party guests up and moving. All you need to play Zombie Glow Tag is the same amount of green and red glow stick bracelets as there are players. First, choose one person to be the zombie and give them all of the red bracelets to wear on both arms. Then, give one green bracelet to each of the remaining players to be the healthy humans.

Cornhole isn’t something that you would usually classify as creepy, but with a little paint and imagination you can turn this backyard favorite into a creeped-up Halloween-themed competition. You can purchase unfinished regulation size or table top size cornhole boards online. Then, let your imagination run wild and use paint to decorate them with an eerie Halloween design. One easy idea is to paint them all black then use duct tape to create spider web designs on the board. When it’s party time, let your crew pick scary names for their teams like “Children of the Corn”  or “The Black Holes.” Make a tournament bracket and get your ghastly game on to see who is the last team standing.

The moon is out and Howl-oween is the perfect time  for werewolves to come to life with this glow-in-the-dark game that’s a combination of hide and seek, tag and scavenger hunts. Wizards & Werewolves is an epic team-based game that pits two mythical forces against each other in an exciting backyard battle of speed, skill and wits. Play as a wizard and embark on a perilous journey to capture glowing magical crystals. Or bare your teeth and howl as you join the werewolves, stalking prey, guarding the crystals and hunting down wizards.

The game comes with 12 light games pieces and offers three levels of play. These levels range from easy-to-play for beginners to highly strategic for advanced players. This game is sure to be a huge Halloween hit! Werewolves howl, hide crystals and hunt wizards, while the wizards use their mystical powers to avoid the werewolves and destroy the dark side.

Did we miss your favorite outdoor Halloween game? Let us know in the comments below!