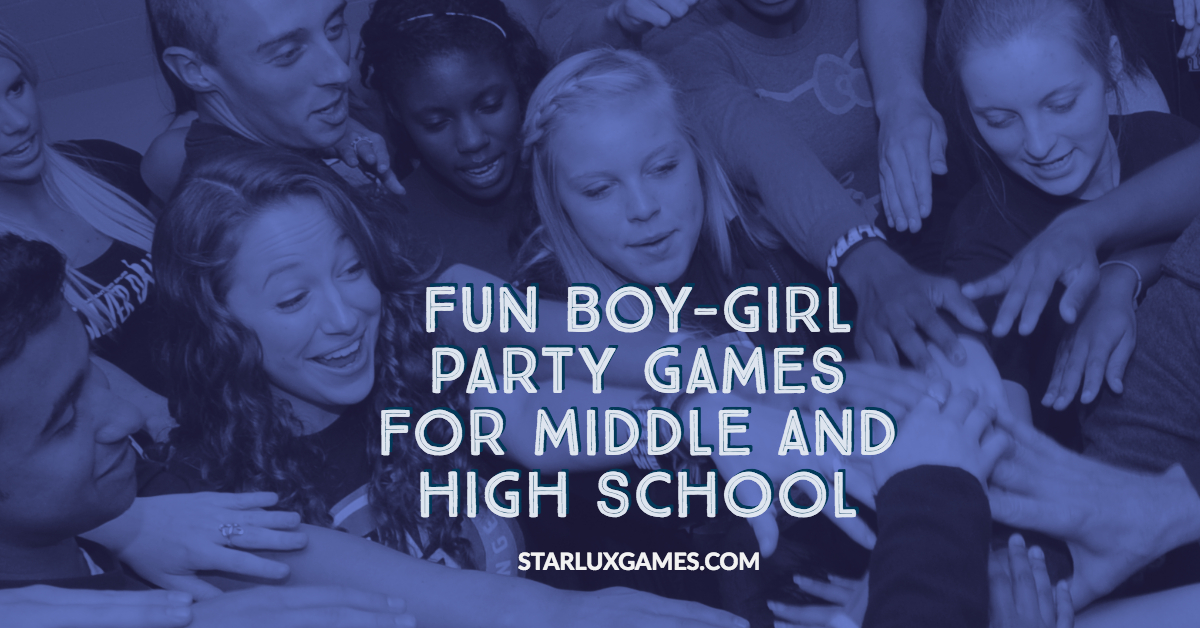 Middle school and high school parties can be awkward, and when you add both boys and girls to the mix, it can become a recipe for the perfect awkward storm.

They either stand around in groups without talking to each other, or they get out their phones and all stand around looking at their individual devices. It’s hard to keep a big group of tweens and teens entertained especially if you don’t want them on their phones all night. They definitely don’t want to play cheesy games that make them even more uncomfortable.

Be prepared for your next boy/girl party with this game list that lets them be active, mingle, practice their social skills and have a great time, too!

The great thing about this game is that you can either play it inside or outside, and all you need is a sackful of blindfolds and a little preparation. Create an obstacle course in your backyard or a larger room with whatever you have on hand – pool noodles, hula hoops, chairs. Have the partygoers get into boy/girl pairs and blindfold one partner in each pair. Then, have the other player navigate their blindfolded partner across the course or through the room. Time the teams and the pair that gets through the course the fastest wins.

Because a lot of boy/girl parties happen after the sun goes down, Glow Battle is the ideal game to keep them outside and active in the evening. Players have to strategize and take down their opponents using harmless glowing batons. Physical activity becomes part of the fun as players run, jump and swing at each other to win. Available for purchase here at Starlux Games, each game box comes with 10 weapons, 10 glowing wristbands, 8 regeneration station markers and 10 game playing cards. Glow Battle can be played with 2 to 10 players and comes with different game variation cards that both boys and girls will love.

Stack It is a really simply game that tackles the entertainment and the snack at the same time. Really any number of people can play and all you need is a big supply of chocolate sandwich cookies or some other sort of stackable cookies. Each player takes turns bending backwards and stacking as many sandwich cookies on their forehead as they can. They keep stacking as many as they can balance until the stack falls off. Then, the next person gets a turn. Keep track of which player can stack the most and they are the Chocolate Champion. To add some friendly competition, you can play as a relay race and divide into boys against girls. Have each player stacks two or three cookies and then race down to the next player on their team without dropping them until all of the players on their team have gone.

Sometimes you just have to break out the electronics to get boys and girls to start interacting with each other and laughing. Catch Phrase is a hand-held electronic game that includes 5,000 words and phrases. Players pass the device around and try to describe the word or phrase on the screen to their teams without saying any part of the phrase. But they have to do it fast before the timer goes off. Categories include Fun and Games, Entertainment, Everyday Life, Variety, and The World. Every time you get caught holding the device when the buzzer goes off, the other team scores a point. The first team to reach 7 points wins. Cath Phrase is available at major retailers like Walmart or Amazon.

This is a fun game to play once your boy/girl party starts getting a little warmed up. It pushes tweens and teens to get a little creative and out of their comfort zone. Two players stand up in front and other players shout out ideas for a funny scene like “buying a new tractor” or “lunch ladies in the cafeteria” and then the two have to start improvising the scene. Any time during the scene, someone from the audience can shout out “freeze” and the two performing have to freeze in the act. The person who yelled “freeze” taps the shoulder of one of them and replaces them up front. Then, someone else has to yell out a new situation or a change in the current situation. Keep playing until everyone has a turn or two as the performer.

Because teens do love their electronic devices so much, they will have a definite connection with this party game. The objective is to create a tweet that is related to the selected #hashtag. You can be as funny and creative as you like. Players then get points for guessing who wrote each tweet, in addition to points for having the funniest tweet.

Players can either respond traditionally on included sheets or text/instant message their responses on their cell phones. For four or more players and for ages 14 plus, #Hashtags is a fun party game to get the boys and girls really mixing at your next tween or teen party.

This is a fun and simple game for all ages to play at either inside or outside parties. You will just need a good amount of space so that the players don’t bump into each other. Purchase a bag of different colored round balloons and blow them up. Then, divide the group into boy/girl pairs and give each pair a different colored balloon. The object of the game is so simple – each pair has to keep their balloon up as long as possible by blowing at it and not letting it touch the ground. The pair that keeps their balloon in the air the longest is the winner.

Because all aged boys and girls love to chase each other, they will love this Capture the Flag REDUX game that uses glow-in-the-dark LED lights. Each kit includes 25 battery-powered, reusable lights that transform playing fields and players into glowing teams of blue and green. Watch them get moving as they break teammates out of jail, sneak into enemy territory, protect base and steal the glowing flag to win. Complete with lit jail markers, territory lights, light-up wristbands and glowing crystals that serve as each team’s flag, this is game they will want to play over and over again. Plus, each game comes with 12 exciting game variation cards. Purchase the game here.

Boy and girl groups love to play “truth or dare” and this is a fun way to let them play and still supervise it. Let your group write out some fun dares on small pieces of paper. Help them think of some fun, challenging dares that aren’t too embarrassing like eat a weird food combination or pull their socks off with their teeth. Then, insert each one into a balloon, blow it up and tie it off. Next, get your group of boys and girls to sit in a circle and take turns picking a balloon to pop. Then, they must do the dare or face the consequences. You will want to glance over the dares and the consequence to agree on ones that are safe and appropriate in your home.

The featured image used in this post is a public image from Joint Base San Antonio and can be found here.