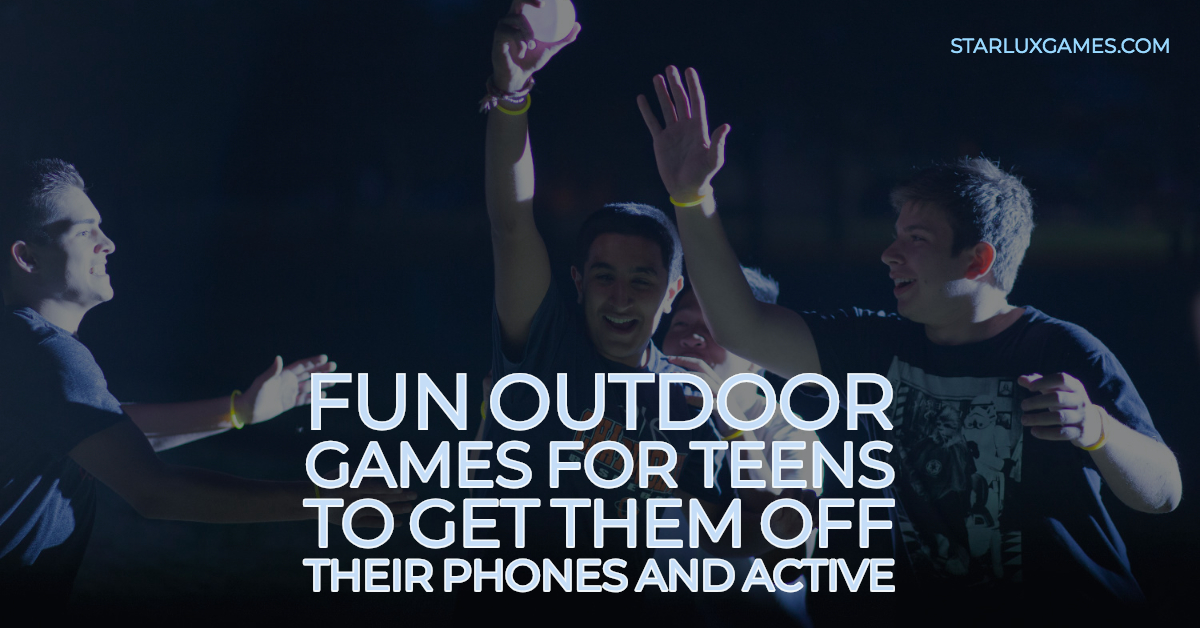 Obviously this makes most parents worry that their teens are spending too much time on their phones and missing out on valuable social interaction and physical activity. In addition, a recent study from Pew Research Center revealed that even teens (over half) worry that they spend too much time on their phones. What does it take to get the phone out of their hands? Teenagers need incentives to let go of their phone addictions, get outside and get active. If you have a phone-addicted teen, check out this list for some active and very fun outdoor games for teens to help your teen develop some healthy addictions.

FOR THE SOLO TEEN

As a teenager, sometimes it’s hard to find a friend that’s available to hang out, and sometimes it’s just nice to be by yourself. That doesn’t mean that you can’t stay active. Maybe now’s your chance to try something new without any embarrassing looks from others – like learning how to ride a skateboard or roller blades. Or, maybe now’s the time to just spend a few minutes getting to know your own thoughts while you keep your body physically active. It’s a good time to go for a long hike on a trail or go biking on a bike trail, wash a car, or perfect your three point shot. Some physically activity and alone time might be just the ticket to boost your teen’s mental attitude.

This is a fun activity for a solo teen that encourages creativity and physical activity. Create and master a miniature putt putt course in your yard. You can make your own with anything you can find at home such as plastic bottles or pool noodles or you can buy a kit such as the My Mini Golf set sold on Amazon. This kit consists of 13 unique course pieces – 9 holes and 4 fun obstacles like the wave, tower, volcano, maze and bridge, as well as two putting discs, one rubber ball and putter, a scorecard pad and mesh storage bag. It can be played indoors on carpet or flooring or outdoors on short grass or asphalts. It’s portable and adaptable to any competitive level The versatile 9-hole course lets you change configurations  for a new course each time you play.

FOR TWO OR MORE TEENS

When it’s just a few teens hanging out, it can be easy to find ways to stay active. Two is the perfect number to play tennis or pickle-ball, go canoeing, play laser guns or have a water gun fight. A pair of teens could find a place to go fishing together, or throw a football, play horse shoes, or break the world record for successfully passing a soccer ball back and forth. For a few more games that work well with two or more players, you can visit amazon or major retailers for these games:

It’s the ideal game to keep teens active after the sun goes down, and can be played with 2 to 10 players. Players use harmless glowing swords to strategize and take down their opponents. Physical activity becomes part of the fun as players run, jump and swing at each other to win. Each game box comes with 10 weapons, 10 glowing wristbands, 8 regeneration station markers and 10 game playing cards with different game variations like the Gladiator version for just two people.

Each player gets an air mesh vest and three balls. Pick your color and take 20 steps from your opponent. Say “go” and start to throw, dodge, duck, run and dive. Whoever is the first player to get all three balls stuck on their opponent’s vest is the winner for that round. The air mesh vests adjust to almost any size. There is also a version with slime balls and a sticky vest where players throw squishy slime balls at their opponent and try to hit the green target on their vest. This is the perfect two-player game to keep teens on the move.

Maybe this game doesn’t have the coolest sounding name, but this outdoor game is actually very challenging and highly addictive. It includes two knock off stands, a flying disc and a storage bag. Then, you provide the the targets to put on the stands. That’s where the fun comes in. You can use whatever you want – plastic bottles, cans, cups, water balloons or toys. Divide into teams and take turns throwing the flying disc at the first team’s target on the stand while the second team stands on the opposite side ready to receive it. Teams score points when the target is knocked off the stand or when the receiving team fails to catch the flying disc. The disc must be caught every time you throw and the target must be caught after it’s hit. The teams keep playing until someone reaches 21 points and wins by two. The best part is that you can take this with you and play on any surface – grass, hard floors or sand – anywhere teens would want to hang out!

When they get the chance, most teens love to hang out in a group, and keeping them all active may seem somewhat daunting without the right entertainment. Anytime they can get outside and play a somewhat organized game is a great way to get some of their teen energy out. One way to bring out some laughter, is to play a three-legged version of almost any type of sport. Have the teens split find a partner and tape or tie their two inner legs together with a rope or bandana. Then split the pairs into teams and play basketball, volleyball, kickball or even tag. For more organized games for multiple teens, try one of the below games available on Amazon.

Sometimes all a group of teens wants is a game that gets them outside and hanging out together. BucketBall is perfect for this. Simply set up two sets of six buckets in triangular formation separated 15-25 feet apart. Then, divide into two teams and take turns throwing the ball into the opposing team’s buckets. Each player on a team tries to throw the ball and if a ball goes into the opposing team’s bucket, then that bucket is removed from the game or stacked inside another bucket. The first team that makes all of the buckets is the winner. The BucketBall starter pack includes 12 sturdy buckets – six of each color – 2 hybrid balls, a tote bag and instructions.

Today’s generation of teens will love this Capture the Flag REDUX game that uses glow in the dark LED lights. Each kit includes 25 battery-powered, reusable lights that transform playing fields and players into glowing teams of blue and green. Complete with lit jail markers, territory lights, light-up wristbands and glowing crystals that serve as each team’s flag, this is truly a modern twist on a classic game. Plus, each game comes with 12 exciting game variation cards. Learn more here.

SEE ALL GAMES
Tags: how to get teens off their phones