Halloween Games for Kids That Are So Much Fun It’s Scary! 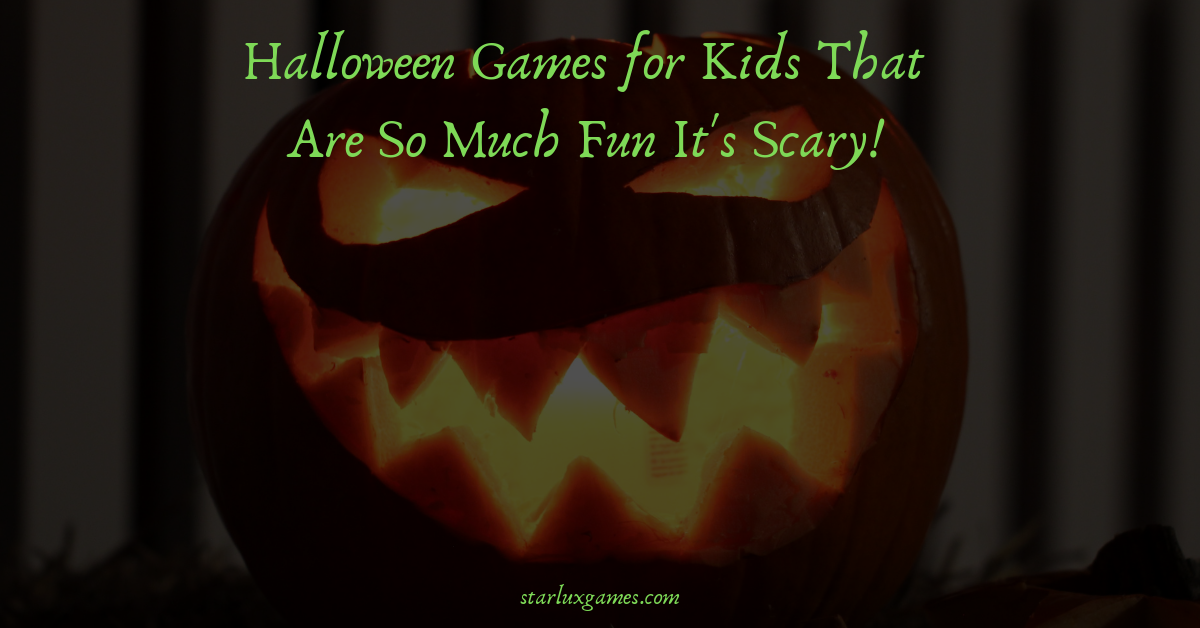 It’s Halloween party time, kids are coming to your house and the thought of how to entertain them is the scariest thing of all!

Don’t fear, there are so many exciting and fun ways to keep your young party guests entertained and out of trouble.

You just need to start with a good game plan, have your supplies ready, and be flexible if the game plan changes. It’s a great idea to include some active games alongside some that aren’t as active so that kids can get some energy out and still have time to wind down.

Since so many Halloween parties take place at night, it’s also smart to have several games that your party-goers can play when the sun goes down. This list of thrilling and chilling Halloween games for kids is the perfect spell for a spooky party.

You probably have the supplies for this one already. All you need are several packages of toilet paper, one roll for every two kids playing.

Split your group into partners and have one of them wrap up the other like a mummy in toilet paper.

Race to see which team finishes first, completely wrapping their partner from head to toe.

You can also play this game as a relay race and have one member race down from a starting point with the toilet paper to wrap the mummy, and then have the wrapped mummy race back to a finish line, just be sure that the mummy can see and move easily.

If you need an inside activity, this is the card game to pick for endless and unbelievable combinations of “Would you rather…?” scenarios.

Three or more players compete to create the most challenging scenario possible by combining two Poison Cards. Then, all of the players anonymously “Picks their poison.”

You won’t believe how crazy some of the choices are and what conversations will be sparked!

When players have to decide between horrible and annoying choices, the game turns hilarious.

For an added Halloween effect, place the cards in a black plastic witches caldron and ask the players to “Pick your poison.” This game is available here.

3. GHOST IN THE GRAVEYARD

This game is a neighborhood favorite and perfect to play at a Halloween party.

When evening rolls around and your kids are looking for some spooky fun, pull out some flashlights and send them outside. Just make sure you have as many flashlights as there are players.

Designate one player as the “ghost” and have them hide in the yard while the other players first count to thirty and then search for them with the flashlights.

The player that finds the ghost yells, “Ghost in the graveyard!” and all of the other players run back to the base before the ghost can tag them. The first player that is tagged becomes the ghost for the next round.

Keep those flashlights out for this next sweet game.

Open up a box of sandwich baggies and put a different candy bar or handful of candy in each one. Then, loop a glow stick through the top of each bag.

Hide all of the bags in your backyard, divide your party-goers into groups of two or three, give them a sack or plastic pumpkin container and a flashlight.  Then, let them go on a nighttime candy hunt. Whichever group finds the most candies, wins.

It’s also fun to play some spooky music while they hunt.

And, there’s no better way to get your party moving than this twist on the classic Capture the Flag game.

Split into two teams designated by different colored LED bracelets and mark your team boundaries with futuristic lights. Then, each team begins the hunt for the glowing orbs or “flags” and can catch opponents and lock them in jail with glowing jail markers.

This game is perfect for any aged Halloween party – kids, teens, adults. The set comes with all of the mentioned glowing gear, a rulebook and 12 game variation cards to keep the games interesting. Available for purchase here.

Kids love making noise almost as much as they love making a mess. This game allows them to do both.

Blow up a large package of orange balloons, and hide prizes in them before you tie them off.

You can either insert fun treats like glow sticks, small candy packs, inexpensive gift cards or funny tricks like shaving cream or jell-o. Then, put them outside in an open space to make a pumpkin patch of orange balloons.

Let the kids stomp away to reveal the hidden surprises and make a big loud mess!

While the kids are outside making a mess, pull out these scary ingredients for the next messy Halloween game.

Then, blindfold the players and have them eat the food and see if they can guess what they are eating.

If your Halloween party starts to turn lame, this light-up battle game is an awesome way to add life to the party. You can play Glow Battle inside in a dark room or outside after the sun goes down – anywhere that you have open space.

Players use strategy, teamwork, and their own warrior instincts to team up and take down their opponent using harmless, glowing batons.

Teams are designated by different colored LED bracelets have a base to “recharge” after they get hit.

Anyone can bob for apples, but only the really fun Halloween parties let you bob for worms.

For each player, prepare a paper plate with five gummy worms that you cover heavily with whipped cream.

Then, make each player keep their hands behind their back and find the worms with their teeth.

Without using their hands, they have to pull the worms from the plate and place on the table.

The person that finds all five of their worms first, is the worm winner.

Do you have any great fun scary games for Halloween that you’d like to share? If yes, please let us know in the comments section below and HAPPY HALLOWEEN from Starlux Games!