The Best Outdoor Games For Fathers And Sons 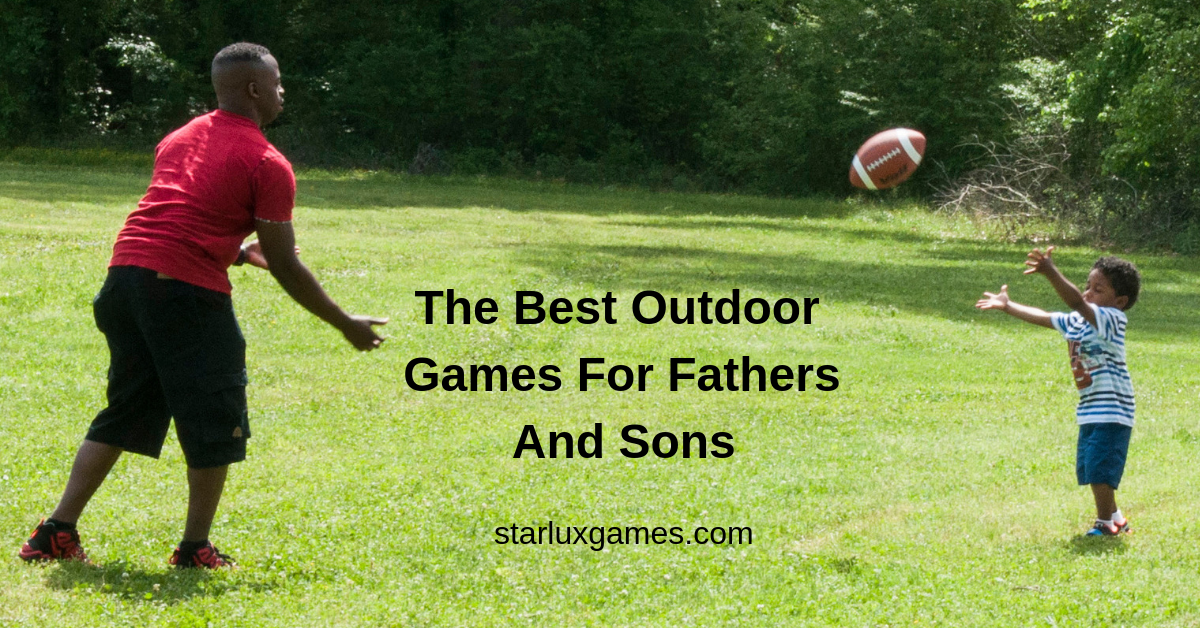 What can the best outdoor games for fathers and sons do for a relationship? Help the chances for dads and their boys to be best friends. Kids often find their best friends through games. So dads should make sure they get involved in games with their sons.

Being a great dad is the goal. Becoming the best friend of a child is an epic bonus.

So what are the hallmarks of the best outdoor games for fathers and sons? Most of the ones we found involve some sweat equity! And dirt. Both are excellent for bonding.

Before we get to the games that make for better dad/son ties, we have to admit that there is a place for video games here. Playing games like Call of Duty with my kids and their cousins was some of the best times I recall with sleepovers at our house. The laughter and excitement of playing together for hours will never be forgotten.

Dads can meet their kids halfway on video games to show they are interested in the kid’s hobby. Then the child is more likely to try outdoor games suggested by their pops.

Since we are talking about Call of Duty type gaming, then playing paintball is a terrific outdoor game. Boys who love to shoot up the enemy on-screen will love doing it in the real-world with paintball guns even more. Digital gaming is exciting, but it is based on real-world battles. So naturally the physical version of these shootouts is better than the simulation. And it gets both the dad and the son more active. Burning calories with paintball is tons more fun than boring treadmills!

One of the best outdoor games for fathers and sons has to be some form of racing… with an engine. We will put go-kart racing in this spot. This can be done at local amusement parks or on a dirt track on a higher level. Either way, competing against each other or other teams makes for many weekends of fun. There have been numerous generations of racing families who learned driving from their fathers and grandpas. And remember what the great philosopher Ricky Bobby said… “If you’re not first, you’re last.”

If paintball is not an easy option, then laser tag may be a better outdoor game option. We often see this game played indoors but it works outside as well. Boys and their dads can play against each other. But even better, they can challenge other dad/son teams in their neighborhood, church group, or Boy Scout troop. Laser tag is not as costly as paintball, making it a more budget-friendly option.

We must mention two Starlux games that are perfect for father-son gaming outdoors. Glow Battle can be played with just two people in order to practice for larger group battles. Think Luke Skywalker training with his old man Vader.

Capture the Flag Redux is the other option for father/son fun time. They can easily get their friends and their dads to play this game at camps, church, or at the local rec. department with members of their sports team.

Like to keep it simple? Then catch is the game that involves no competition, just a basic physical activity that is conducive to good conversation. Those who have tossed a football or baseball around with their own dad can remember how easy it was to talk during catch. Conversations are hard in the middle of a movie or with a headset on playing video games all the time.

Golf can take a bit more money to get involved with, but who knows… the kid could get on the PGA tour one day! Doubtful, but it’s cool to wish out loud. Regardless, it’s better for fathers to bond with their young ones over 18 holes than to end up millionaires. Money doesn’t solve every problem. Just ask Tiger Woods. He would have given up all his cash for a few more years with his dad.

On the opposite side of golf is a game that still takes patience and concentration. Archery is tailor-made for dad and son bonding. It’s a great skill to have for hunting of course. But also for a possible zombie apocalypse. Playing against zombies on Call of Duty doesn’t really prepare people for the worst! Being able to place an arrow in the bullseye does put a father and son team in a good position save humanity one day. Let’s hope it doesn’t come to that.

The last mention on our list of the best outdoor games for fathers and sons is a tough one… adventure racing. These involve challenging races that can make a marathon look like a walk in the park. These events are not on every corner so some travel may be needed. It would be worth it for dads to kayak, run, and bike with a son to see what they are made of as a team.

If adventure racing is too hard to find then there is another option. Spartan-type races are more common and affordable. Getting dirty climbing over walls and under barbed wire is what dads and sons were meant to do, right?

If you have a story about a game or outdoor adventure that strengthened the bond with your father or your son, we would love to hear about it.

The featured photo used in this blog post is by  U.S. Air Force Master Sgt. Dachelle Melville/Released and can be found here.

Tags: games for fathers and sons