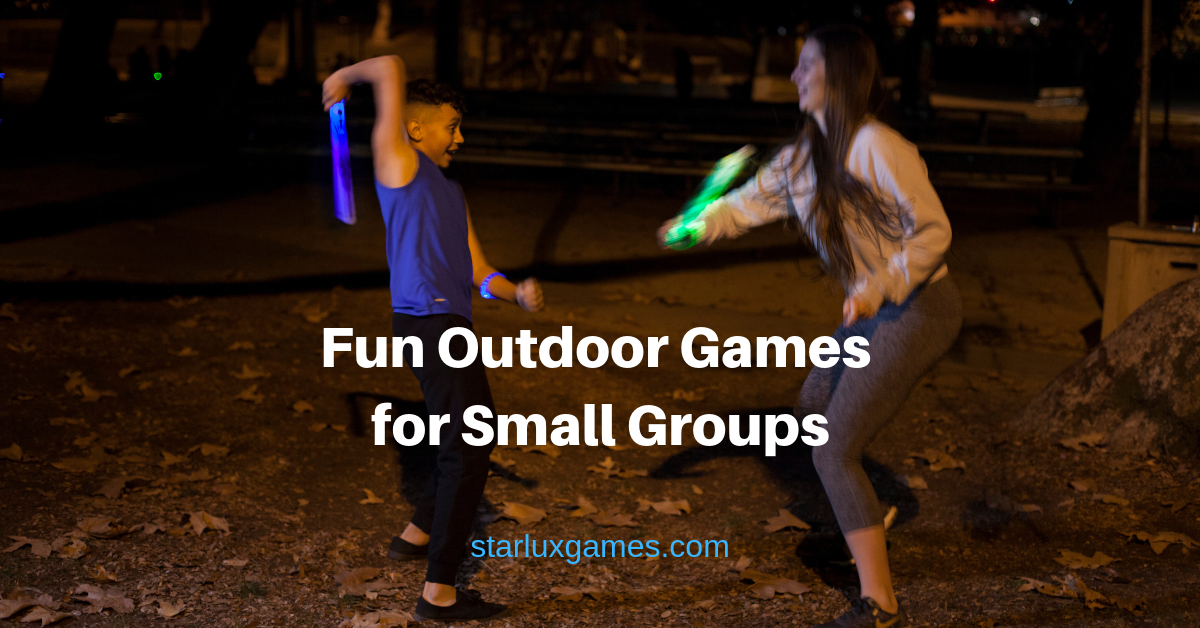 Playing outside can be fun no matter what size group you have.

Big groups of kids are perfect to play outdoor games that require a lot of players, but sometimes it’s fun to have a small group of kids to play in a more intimate environment. In fact, having a few good friends over can be a wonderful way to spend an afternoon or evening outside.

An outdoor game for a small group of two to four players can give kids a chance to get in some physical activity and really work on their skills without the pressure of having a lot of other kids around. The next time you have just a few kids over, consider sharing in the fun with these outdoor games.

You only need one or two other players, a hoop and a ball to play this timeless game of precision basketball shooting.

Players take turns announcing what shot they are going to take and then performing that shot. If they miss the shot, they are done for that turn, If they make it, the next player must take the exact same shot. If that player misses, they must take a letter from the word “HORSE” starting with the “H.” Then, it is their turn to announce a shot and take it.

Every time a player misses a shot after the person before them makes it, they must take another letter until they spell out the word “HORSE.” Once they have spelled it out, then they are done. The players all continue playing until there is only one player left, and he or she is the winner. It’s exciting to see what creative shots that each player can come up with along the way.

It just takes two to have a ball in the backyard, or at the beach, or at the park.

A paddle ball set is always handy to have around to play with a friend, and it needs no net or other accessories to play. Try a set like “Matty’s Toy Stop Deluxe Wooden Paddle Ball Game” (available on amazon). It comes with two high quality wooden rackets with bullseye design and plastic handles, three solid rubber balls and a mesh storage bag.

For even faster fun, you can try the “Speedminton Light Wooden Beach Paddle Set” that includes two light wooden paddles, two balls, plus a fun speeder birdie (available on amazon). Both sets make for a fun afternoon of exercise and are a great way to work on eye-hand coordination. You can even perfect a few trick shots with your paddle ball partner.

Hopscotch is not just for little girls with pigtails. It can be a really good outdoor game for a small group and can be played in a variety of ways.

First, draw a hopscotch course on the ground with chalk or washable paint. You can get creative and make any design you want, but it is usual composed of a series of connected squares in ones and twos. The last square is the home base where the player reverses and returns back. Number the squares in the order of how they are to be hopped.

Players take turns throwing a stone or marker in each square in consecutive order and then they hop to that square to pick up the stone and bring it back to home.

Then, they continue to the next number hopping on one foot when there is one square and on two feet when the squares are side-by-side. You can vary up your hopscotch court to make it longer and more challenging or add a timer to amp up your game.

Whatever you choose, it will keep you hopping!

It you want an exciting outdoor game for four players, Spikeball is a uniquely fresh and fun choice.

It is a two-versus-two sport and can be as competitive as you want it to be.

Spikeball is easy to learn and you can play anywhere that you have open space – the backyard, the campsite, even in the pool. It includes an adjustable round playing net that has foldable legs making it easy to store, plus three balls, a drawstring storage bag and rule book.

The adjustable net lets you play at the tightness and competitive level you want. Before you know it, you’ll be hitting monster shots for the win!

Grab a playground ball and some chalk and you can have an afternoon of small group fun.

Four Square is an active and somewhat addictive game that can get really competitive. The object of the game is to eliminate the other players in the higher squares and advance to those squares yourself.

First, draw a large square composed of four equal smaller squares marked one through four, then each player positions themselves in one of the four squares. They use their hands to bounce the ball to each other so that the ball bounces one time only in the other person’s square. If one person can’t get to the ball in time or makes an error, then he or she is eliminated and all of the other players advance to a higher ranked square and a new person enters at the lowest ranked square.

There’s no catching or holding the ball, so the game can get pretty fast and heated as players try to “out” their opponents.

Glow Battle is a glow in the dark sword battle game is the perfect outdoor activity for a small group – especially as the sun goes down.

Players use strategy, teamwork, and their own warrior instincts to team up and take down their opponent. Plus, they use up a lot of energy, which is why parents love Glow Battle, too.

Identify your teams with different colored glowing bracelets – you can play with two, four or more players. Use the harmless, glowing batons to attack your opponents, and send them running back to their base to “recharge” before they get hit again. It’s a great way to keep your kids active, teach them strategy and encourage social interaction. It’s easy to set up and simple to play.

It’s a seriously fun game with a silly name.

All you need are two bases, a tennis ball or baseball, a wide space to run and at least three players.

Set the two bases about twenty feet or so apart depending upon the age and skill level of the players. Then, designate two people to be the fielders that stand on each base and throw the ball back and forth to each other. The remaining players are all runners that try to move from base to base without getting tagged. As long as they are on one of the bases, they are safe, however they cannot remain standing on a base, they must run at lease every other time the ball is thrown.

The goal is run to back and forth as many times as possible without being tagged. Once someone is tagged out, the players switch positions so that everyone gets turns being a fielder and a runner.

Not only is Pickle great fun, it’s also an ideal game for developing throwing skills and for building endurance and speed.

If you enjoy glow in the dark neon games, check out our games store.