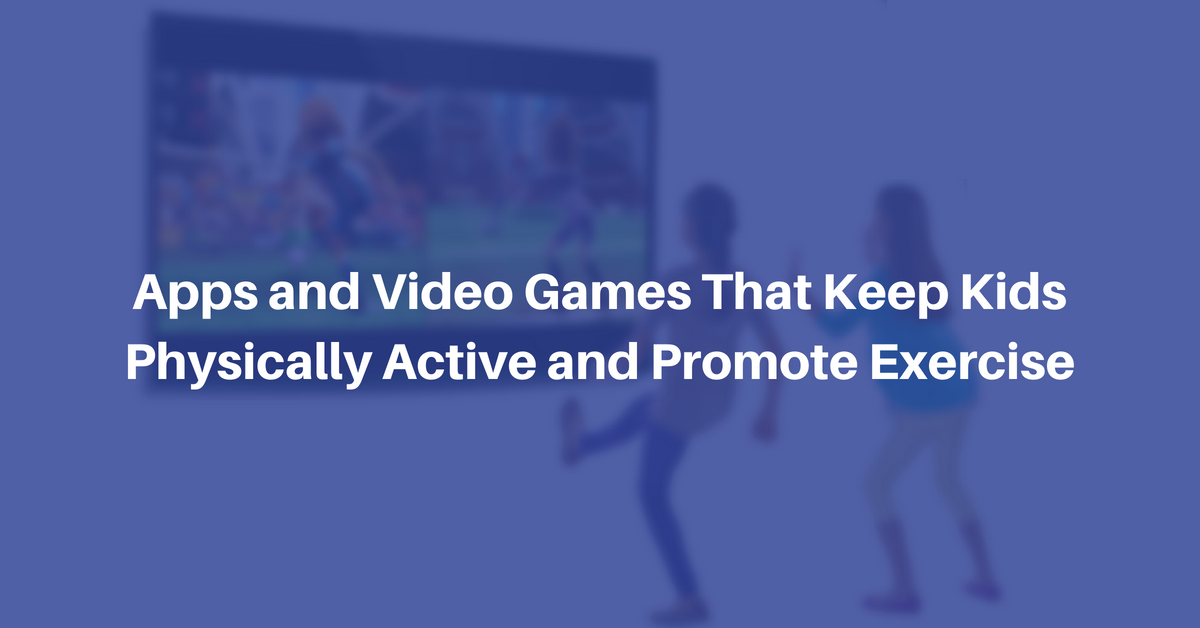 You would think that every wanna-be tech billionaire would be designing apps and video games that will help keep kids physically active and promote exercise. After all, parents are more than willing to buy games that keep their children entertained and encourage fitness as well. Unfortunately, Silicon Valley is more concerned with the easy route of making apps that keep us stationary, with zombie screens sucking the life out of humans, young and old.

There is hope though. For parents willing to dig deeper, there are apps and video games that improve kids’ health while giving them something fun to do. But digging sounds like work… so we got our digital shovels out for you and found several options for kids to go from screen life to active life.

The following are apps and video games that encourage physical activity and getting exercise. Of course, they must be fun or they won’t be used. So we made sure fun was part of the algorithm those geeks used to create the game in the first place!

The first game is one that is sure to get a hardcore gamer out into the sunlight. Ingress is an app that can’t be played with feet up and Cheetos falling in your lap. This Android game is played in the real world and it has a story, a mysterious one. Your child will get moving as he tries to unravel the mystery of a plot against humanity. This one has received several awards and has rave reviews. Click here to check it out if you need a way to “trick” your offspring into burning more calories.

Knockout League for PSVR is a boxing game that lets kids get out some frustration while building stamina and coordination. I’m not sure what youngsters are frustrated about with all the leisure time, free food, and complimentary shelter they receive from parents like us. Nonetheless, this game is a stress-buster, so moms and dads – feel free to swing away at the screen too. Most dads remember Nintendo’s Punch-Out, so they will love this modern game that actually improves cardio while pretending to be a tough guy.

During our digging around, we found this sneaky smart app that will force kids to get moving… or else. The “or else” is that they won’t be able to access their favorite apps. Parents set a step goal for the child and if they fail to meet it, they are locked out of SnapChat or maybe Instagram. Goya-Move can block any app that sucks away their time and bits of their health, mental and physical. If Little Johnny doesn’t like it… GOOD! Tell him the easy fix is to get to stepping!

See this similar app called Unglue that can get the little ones to fold some laundry in exchange for more screen time.

Some kids are into video games with racing involved. If that sounds like the short person living rent-free in your house, check out the VirZOOM Virtual Reality Exercise Bike and Games (available on amazon). This is not a cheap option, but it offers a tremendous way to stay in shape while having fun on a stationary bike.

Xbox One offers tons of addictive games. I’d love to buy one of those gaming systems, but would soon abandon work and end up gaming under a bridge. Luckily they do offer some games that require physical movement. Kinect Sports Rivals (available on amazon) is great for competing on-screen using body motion to control your avatar. Kids and teens will love this video game that encourages physical activity and getting exercise. The contests range from cliff climbing to soccer to wave-runner racing. One of the best aspects of this game is the realistic look of your character which can be your digital twin. I had a friend, an alleged adult, who used to spend hours on Madden Football customizing his team uniforms. Gamers love to see part of their own identity on big screens.

Last but certainly not least is Pokemon Go. It was just a couple years ago that Pokemon Go set the gaming world ablaze with a game that got kids excited to be outdoors. For that, Nintendo deserves major props. They figured out how to make a game playable in the real world, with challenges that got entire communities involved. Many copycats have come along since to make apps that promote exercise. And that’s not a bad thing.

The more games available to fight obesity and sedentary lifestyles, the better.

What can we parents do to get more of these type games in front of our favorite young people? Easy – buy apps and video games that encourage physical activity and exercise. Money is a motivator for game creators, just like for any business. So when they see trends going toward healthy games, then they will naturally devote resources to that arena.

If we missed a sweat-inducing app that you are using to lure your children into better fitness, please tell us about it.

If you or your children enjoy glow games, make sure to visit our online game store.