Awesome Yet Safe Battle Games For Kids Who Love Roughhousing 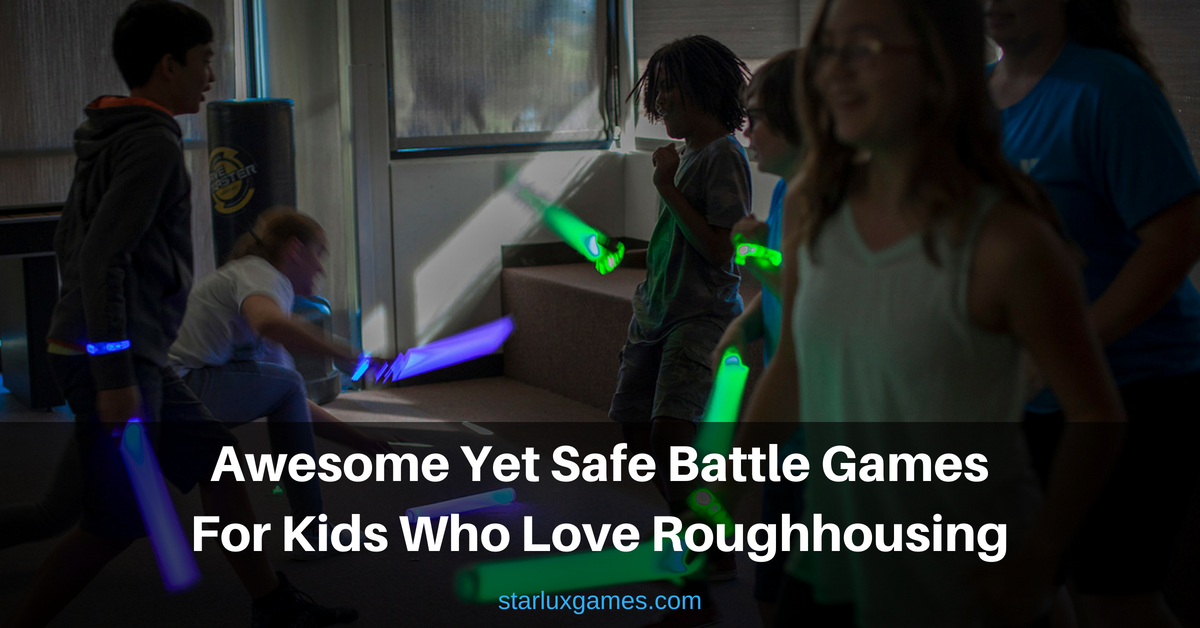 Most youngsters want to play awesome battle games for kids that involve some level of roughhousing. But as parents we have to make sure they are on the safe side. Yin and yang, you know?

Luckily there are many games out there that include fun physical play but that are safe. We’ll take a look at those that made our “best of” list in just a moment.

First, let’s consider why parents should allow battle games for kids when the sofa is a safe place for children. Hilarious! Sitting still is as dangerous as any activity known to mankind. *Except the insane stuff they do on Shark Week.

The reason kids need physical activities is because the best way to hurt a human’s body is to not use it. I heard that from a crazy old surfer on a documentary once. And it’s true.

Do we want our kids to have a few bumps and bruises from fun adventures or do we prefer zombie kids, numb to life by addictive technology? The answer is obvious. So let’s get to some awesome battle games for kids who love safe roughhousing.

I can see a party being the best event of the year with “bumper balls” (available on amazon). A kid wouldn’t want to go to school dressed in a balloon suit, but it’s perfect for smashing into their friends at a party. The suit keeps the players safe as they come up with new ways to use them, such as:

If your child is into solo games in between get-togethers, then he or she will enjoy battling a punching bag. A punching bag will build up stamina and hand-eye coordination.  You would be surprised how fit a person can get with boxing drills. And it’s not a bad idea to be able to defend yourself in this day and age.

Another awesome battle game for kids is one that we just rolled out called “Glow Battle” and it’s getting terrific reviews on Amazon. Glow Battle lets young people smack the crap out of each other with harmless glowing foam swords. It’s the best way to sword fight in the darkness while doing no harm to your opponents… except to their ego. Glow Battle is the perfect game for Scout events, camping, birthday parties, or even backyard BBQs. Parents are allowed to play, but keep your head on a swivel… those young-guns are sneaky.

Water battles are fun and cool, especially when the sun tries to keep us all indoors in the heat of summer. If your tribe is getting too comfortable in front of the TV with the A/C blasting, then send them to the pool. A water cannon set (available at amazon) will make the swimming more entertaining. It’s a “violent” battle in the water but it’s hard to get hurt by a water gun!

This next toy is for toddlers and may be intended for practical uses. It is an electric bumper car for toddlers (available on amazon). Heck, the only reason I liked fairs as a child is because of bumper cars, even if they had gum stuck on the steering wheel and a half-drunk guy overseeing them. If a playgroup of toddlers can’t have fun with their own personal bumper cars then they should just grow up. See how they like that!

The last battle game for kids we check out is as old school as it gets. I imagine King Arthur was rolling around practicing with some dangerous swords as a child. In this modern age we can let our kids have the same fun and training without the danger of losing a pinky toe.  A foam sword/shield set (available on amazon) is perfect for parties or for siblings who love to haggle (a.k.a fight) over toys or who gets to sit in the recliner.

I do want to mention three games that were awesome during my childhood, forever ago. But certainly are not considered safe. They could even be illegal in most industrialized nations:

Just stick to the safe battle games for kids that still allow for plenty of rough play and physicality. There’s nothing wrong with a youngster taking advantage of a comfy sofa. Just as long as they are exhausted from playing all day with their friends out in the sunshine, where life happens.

If your children enjoy glow in the dark games, make sure to visit our online store.