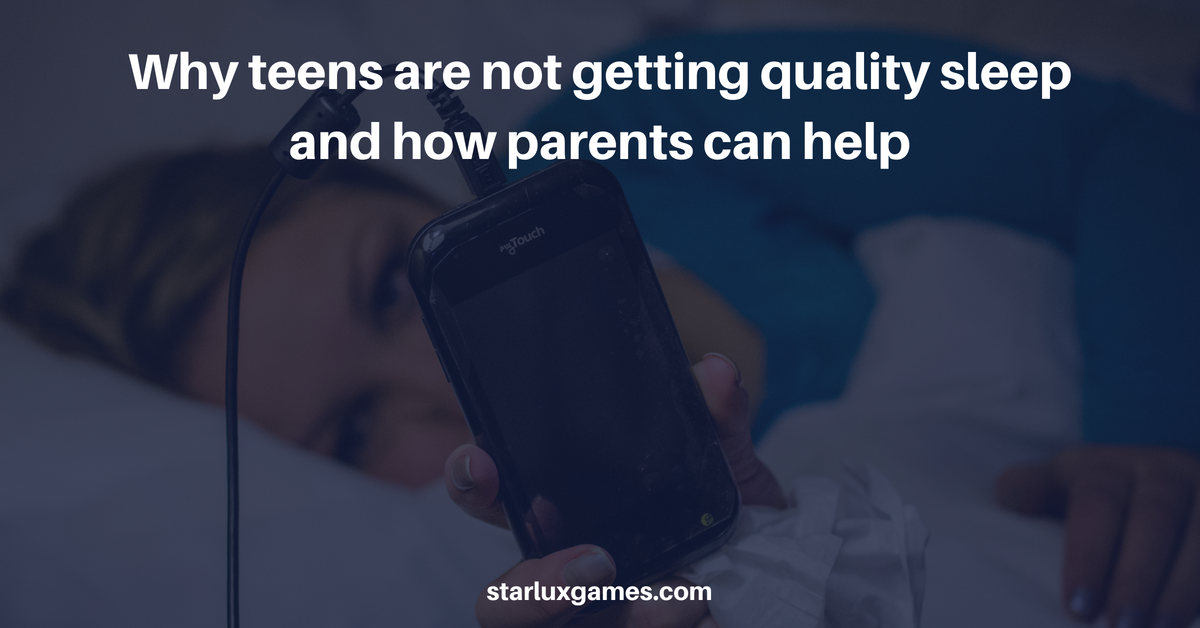 Being a teenager seems to be synonymous with being tired and grumpy. Studies show that teens need between eight and ten hours of sleep each night, but most don’t get it.

In fact, two out of every three teens is sleep deprived, and that’s just not healthy. Sleep is like fuel for their growing brains and their bodies. Teens need good sleep habits to perform their best when they are awake and to manage the stress that comes with being a teenager.

If your teens seems like he or she is wired to stay up late, there’s a biological reason for that. Sometime around puberty, teens’ circadian rhythms, or internal clocks, shift and their brains don’t begin to make melatonin – the hormone that helps them fall asleep – until later in the evening. They develop a slower sleep drive then younger children making it hard for them to fall asleep naturally.

On top of that, the time they spend on electronic devices at night also interferes with their sleep routine. Playing video games and texting on cell phones or tablets keeps them from winding down. With all of this working against them, it’s important for parents to encourage a good sleep routine that helps them get enough shut-eye.

Here’s what Parents Can Do To Help

It’s hard to manage, but it’s important for your teen to get as close to eight hours of sleep as they can each night and, ideally, to go to bed as close as possible at the same time. Try to encourage your teenager to stick to a bedtime routine, and to do things in the same order each night such as a light snack, shower and winding down an hour or so before bed.

It’s also good for them to stay on that same schedule on the weekends if possible, waking up within two to four hours of their normal wake time. An activity tracker like the Basecamp Fitness Tracker (available on amazon) can help monitor the amount and quality of their sleep every night.

2. CUT OUT THE CAFFEINE

Excess amounts of caffeine can keep your teen from falling asleep and affect the amount of deep sleep they get.

Encourage your teen to avoid caffeine especially four hours or so before bedtime. Not only drinks like energy drinks, coffee, tea and cola, but also food products with chocolate like candy, ice cream and protein bars. How teens sleep has a good deal to do with how they spend their day.

In addition to cutting caffeine during the day, there are many other daily habits that can help teens get a good night’s sleep. The Insomnia Workbook for Teens (available on amazon) can help them create good sleep habits so that they feel alert and ready for their day.

You’ll want to make sure that your teen has a comfortable sleeping environment. A bedroom that is cool, dark and quiet is ideal for sleeping. Some even prefer to sleep to the sound of a fan for a white noise effect.

If the room gets morning sun, you might consider investing in dark curtains or blinds to help block the light. The Moonen 99% Blackout Drapes (available on amazon) diffuse daylight softly and also cut down on outside noise helping you wind down easier at night and sleep in when needed in the morning.

4. SCREENS OFF AN HOUR BEFORE BED

Teens love their screens, but it’s so important for them to turn them off an hour or so before bedtime. Not only does it generate excitement from staying up late and interacting with friends on social media, but electronic screens also emit a “blue light” glow that stimulates their brains and suppresses the production of melatonin preventing teens from feeling sleepy.

Plan ahead on any homework that needs to be done on a screen and get it done earlier in the evening so that they can be screen-free before bed. Remove any phones, tablets, TVs or computers from their bedroom. It’s a good idea to have a charging station for their multiple devices like the Eco Bamboo Multi-Device Charging Station Dock and Organizer (available on amazon) in the kitchen or another room in the house so they are not tempted.

If you want your teens to fall asleep faster and wake up feeling rested and ready, then get them moving during the day and evening. Regular physical activity can improve the quality of their nighttime sleep, and increase sleep duration.

Exercising outdoors also reduces stress, which leads to better shut-eye and better general health. Teens should strive for 60 minutes of physical activity during the day. Studies show that regular exercise not only makes you feel more tired at bedtime, but also is a natural relaxant.

Encourage your teens to get out and walk, bike or play active games. Some fun games for teenagers that keep teens moving include Capture the Flag REDUX, which is a perfect choice to keep teens outside, active and social. It’s the classic Capture the Flag game revolutionized with futuristic glow-in-the-dark lights. Great for keeping teens busy as they break teammates out of jail, sneak into enemy territory, protect base and steal the glowing flag to win. Plus, it gives teens a healthy alternative to screen time as the sun goes down.

Each game box includes two glowing orbs to use as the “flags,” color-coded LED bracelets to differentiate team members, glowing jail markers, and a rule-book. As an extra bonus, each kit includes 12 game variation cards that offer even more ways to play Capture the Flag, as well as other games. Sleep will come easier for your teens after an hour or so of active playtime as their body cools down and the tension from the day wears off. Better health, less stress and improved sleep is the ultimate combination that even a grumpy teen will love.

If your teenager enjoys playing glow in the dark games, check out our online glow games store.