How to Play Capture the Flag REDUX 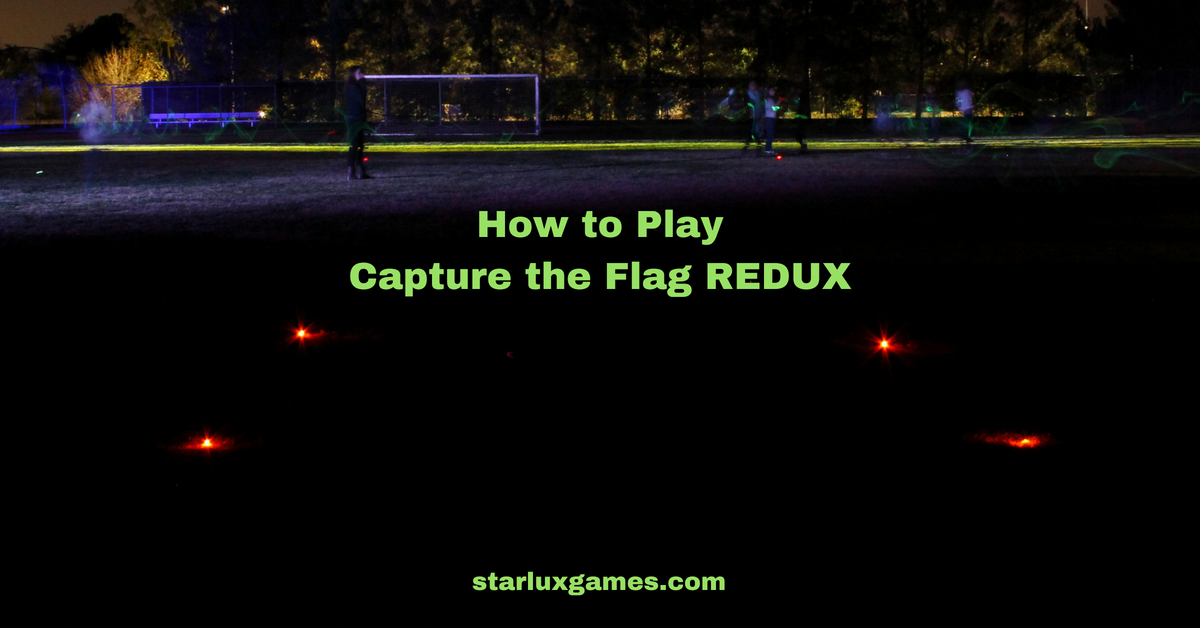 The concept and theme of Capture the Flag stays the same. Two teams try to defend their territory and their prized possession, a flag, from each other. How to play Capture the Flag Redux involves defense and offense. They meld together as each team defends their flag while trying to steal the other team’s flag.

The victory goes to the team that grabs the enemy flag and returns it to their own territory without being tagged.

The big difference in our version and old school Capture the Flag is the thrill of playing the game when the sun goes down. We wanted a game that doesn’t have to be shut down when the sun slides behind the horizon. You could play the traditional version in the dark if you didn’t mind falling in a ditch or running head first into opponents. Scroll to the bottom of this page to watch our video on how to play Capture the Flag REDUX.

Capture the Flag Redux makes it possible to play the game because the game pieces all glow in the dark. You can see the enemy because they wear glowing wristbands and the field is marked with glowing orbs. The flags are visible too of course since fumbling around blindly looking for the flag at dusk would be insane!

The setup for CTF Redux is easy. Wait for the sun to set, then divide all the players into two teams. Mark the borders of the field of play just as you would for any sport needing boundaries. Also, each side of the field needs a jail. Jail is for enemy players who get caught (tagged) in the opponent’s territory. Jail is marked with glowing orbs.

The last phase of the setup is each team hiding their flag on their side of the playing field. Make it hard for the enemy to find it, but don’t break the rules by putting it under something so it’s not visible at all. Digging a four-foot hole is clever but totally illegal.

As the game begins keep in mind you need some light to play since running in total darkness can cause injuries.

The game starts when all players are ready and someone gives the countdown to begin. Any of the following screams will work:

Each team now tries to grab the other team’s flag. They have to defend their own as well. Attackers go after the flag but can be stopped and sent to the glowing jail area. The back and forth continues until one team gains the advantage by locking up many enemy players. This makes it easier to overwhelm the remaining opponents with an assault that wins the game with a flag capture.

Some planning will help get the victory. Capture the Flag is a battle and battle plans are not created for the heck of it. They actually help. Teams need to designate which of their players are attackers and which need to hang back to defend their own flag. This keeps up a balanced effort.

Having no defenders makes it easy for an organized attacking team to snatch the opponent’s flag in no time at all.

Each team must choose how to play Capture the Flag Redux. Aggressive or patient? Both strategies have their merits. Either way teams must eventually go for the flag in order to win the game. Doing so is risky since players can be tagged and sent to jail as soon as they cross the border into enemy turf. Jailbirds can be rescued by teammates so it’s not a life sentence.

You can see that Capture the Flag Redux is an improvement over the traditional daytime version. Why should the fun stop at sunset?

Now that you know how to play the Capture the Flag Redux variation we will let you in on a secret.

Not only does this game make outdoor gatherings perfect for nighttime fun, it adds variety. There are several additional variations included in the game kit. Werewolves and hunters are only part of the additional fun!

If your children enjoy playing glow in the dark neon games, check out our game store.

SEE ALL GAMES
Tags: capture the flag, how to play Capture the Flag REDUX