Fun Dress Up Games for Kids and Teens 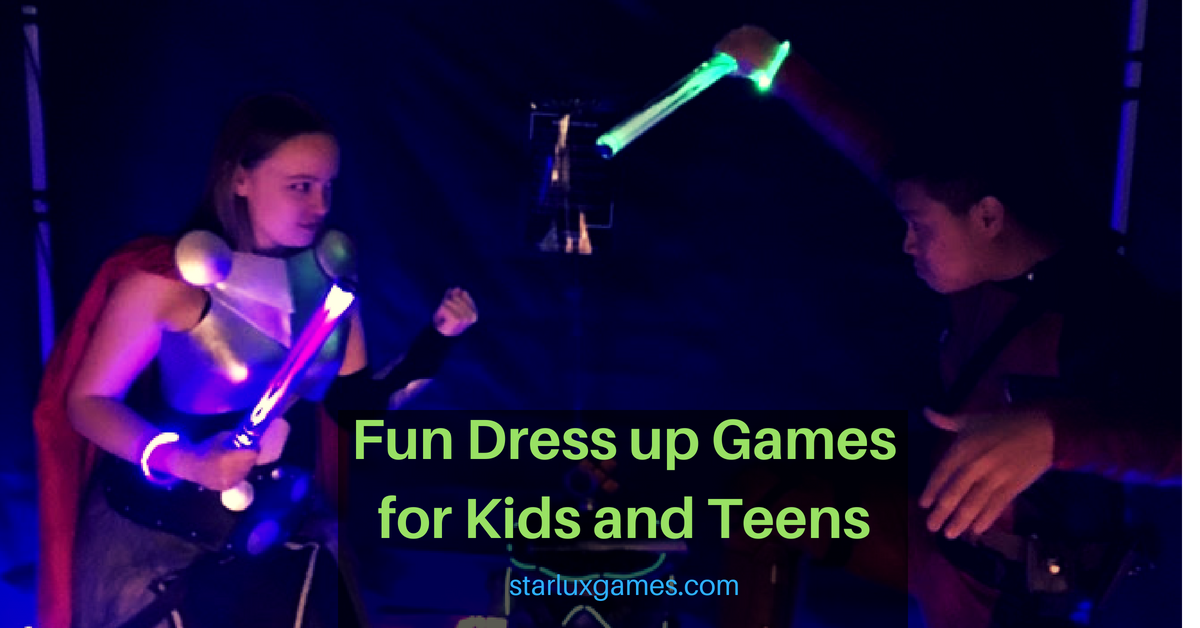 Fun dress up games for kids and teens can enhance any TV show or film that gets those younglings fired up. We know this from our testers who mix in Star Wars role-playing with our Glow Battle game that has glow in the dark swords that remind kids of lightsabers. Playing out fantasies in the real world based on storylines can continue the fun and excitement long after the $13 tub of popcorn is devoured.

Of course, there are haters out there who don’t think dressing up as an action hero is cool. Haters gonna hate, but keep in mind that some awesome people play dress up. Val Kilmer, Ben Affleck, and Michael Keaton have all dressed up as Batman. And made a few million doing so!

Both Gal Gadot and Lynda Carter put on a costume to act out a role as Wonder Woman.

Just as these famous actors played out fantasies on the big screen, others can get in on the action with these fun dress up games for kids and teens.

With movie battle costumes (available on amazon) youngsters can play any hero they like. Maybe they want to act out an epic scene between Captain America and his old pal The Winter Soldier. Or the teens may fight it out as Cap and Ironman. My money is on the guy with the shield since Ironman is ironically soft, having grown up with a silver spoon.

It doesn’t get better than laser tag for kids who enjoy Star Trek, Star Wars, or Terminator 2. They can dress up like the crew of the Enterprise or like robotic killers of the future who try to wipe out mankind. If they act out Star Wars battles, it’s best to avoid the role of the Ewoks – a sore subject for diehard Star Wars fans.

Are those first two games not serious enough for you? How about diving deep into the world of real-life role-playing games? Be careful. These live-action games can get expensive, but they look awesome.

There are some epic movies with terrific water battles that kids and teens can emulate with a waterlog jousting set (available on amazon). Perhaps you have a kid or three who loves Pirates of the Caribbean. Or there are also fans of shark movies like Jaws, 47 Meters Down (why so many haters for this one?), or The Shallows. It’s best to play the role of the shark with this battle set since they are usually on the winning side of things.

I can think of several heroes that kids and teens can dress up like and get into some bow and arrow action, and Robin Hood is an oldie but goodie. How about the dude from The Last Samurai? Or go with the Avenger, Hawkeye.

Do you think real-world gaming can not be beneficial? Think again. Gaming in the outdoors can improve one’s health by doing physical activity regularly. But have you ever heard of a role-playing game that teaches self-defense? This zombie survival camp in Canada gamifies survival against the undead. As a bonus, the instructors teach players how to defend themselves for actual use in our world. They also show participants how to survive in the woods in treacherous scenarios.

You be the judge of whether or not to take your kid with you to a zombie camp. Just rest assured they will be jealous if they see you come back with the ability to choke out a zombie or fend off a real-life Negan. If that is too hardcore, then a spin on Capture the Flag Redux with zombies versus humans is a perfect option.

Any costume can be used to play fun dress up games for kids and teens. It only takes imagination and creativity. Both of which are available to us all if we unplug from tech devices and screens on a regular basis. It can be hard to create our own thoughts when we are constantly checking in on what others are telling us to think or focus on.

Make sure to check out our list of the best games for teenagers.

Tags: dress up games for kids