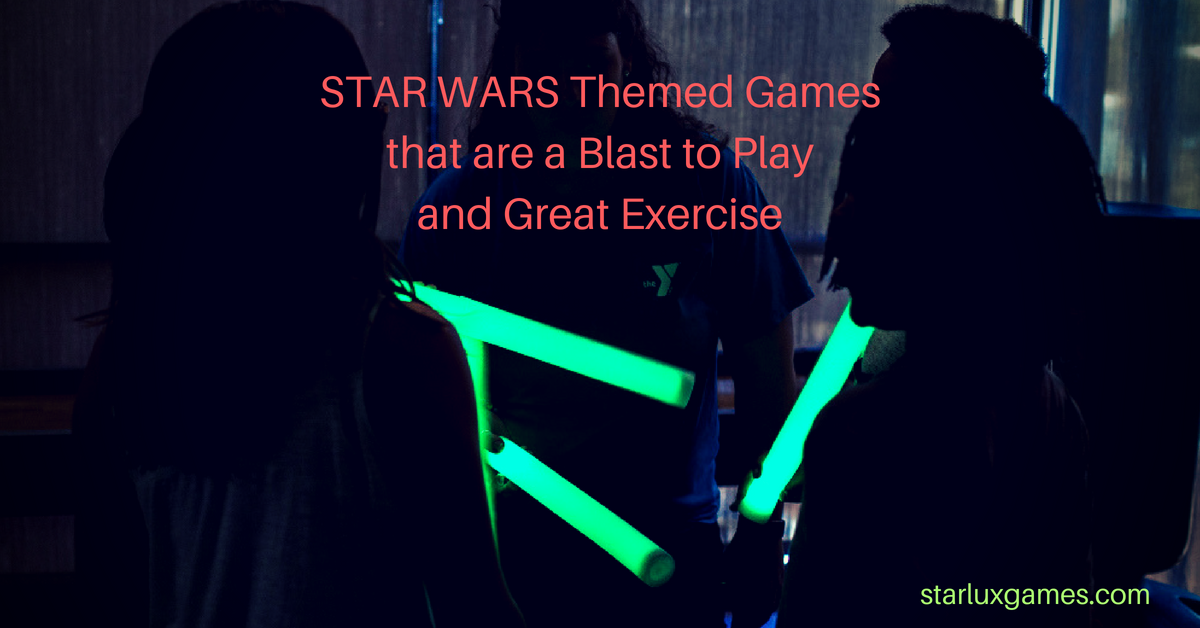 Burning some calories and getting fit can be fun with a few Star Wars games that take the boredom out of exercise. Trust me, we all would be in better shape if treadmills had the appeal of running around a galactic destroyer.

Kids and adults who love Star Wars can easily mix in games that relate to the space odyssey. Games make fitness fun and not so regimented. If you want a personal trainer to scream at you at 4 a.m. fine. But a Jedi obstacle course can build muscle too.

Let’s start with a game that most anyone loves. Basketball.. with an evil twist. Kylo Ren didn’t make his middle school B-Ball team. That explains much of this fellow’s anger. Perhaps sweating it out in a game of one-on-one with his old man, Han Solo, would have been a good stress release for the villain. Grab a Kylo themed basketball (available on amazon) for fun all year round on the court with family and friends. Do some sprints in between games so you don’t tire out in real games.

There is no end to the games that can be enhanced with Star Wars walkie-talkies (available on amazon). They could be used for scavenger hunts or in Capture the Flag competitions. How about recreating scenes from Star Wars with timed challenges like saving a planet or destroying a Death Star? Even as an adult, I still want to walk around with a walkie-talkie. Yes, I’d look weird. But I’m willing to risk it to feel like a kid again. Maybe even learn Morse Code while I’m at it.

Next up is a Star Wars game that can release frustration while improving hand/eye coordination. With a Star Wars punching dummy (available on amazon), you and your kids can get revenge on Kylo Ren for whacking his own dad. Cancel that. Revenge isn’t exactly a Jedi goal. In fact, it leads directly to the Dark Side. So just use the punching bag for fun and fitness. Have a contest for who can land the most punches in 60 seconds. Mix in some combinations to see who can land the most variations of strikes too. There is no limit to the fun you and your crew can have while beating the snot outta Kylo’s masked face.

We found these DIY Jedi games on Pinterest. They will test the focus and fitness of your powerful tribe. Here is a taste.

Those lightsaber lessons will come in handy if you are ever in the San Diego area. These underground fighters don’t brawl in cages. They have a good time with lightsaber battles. And the turnout is impressive. This group even has Jedi training. No one gets “unarmed” like so many Star Wars characters have over the years. But the contests do involve lots of movement, which turns out… is better for your body than staring blankly into phone screens.

We shall never brush aside Star Wars games that involve laser blasters. Han Solo didn’t use a lightsaber and he was the coolest character of them all. Laser tag is a perfect game to get into the role of Solo or even a robotic Storm Trooper. Just know that Troopers miss ten out of ten shots! Check out how to make your own laser tag obstacles with cardboard boxes on Pinterest. Because the game ends real fast with nothing for anyone to hide behind!

In case you didn’t know, we have a game that your family can use to play the role of your favorite Star Wars character. The Last Jedi is available Tuesday 6.26.18 on Netflix. So why not use GLOW BATTLE for some fun before settling in to watch the latest Star Wars flick. Be Rey if you can. Kylo is an emotional roller coaster and you may go insane playing him for too long! Kids remember, your parents will school you when you make them angry. No spoilers in case you have yet to see The Last Jedi, but the master isn’t gonna let the student embarrass him. Click here to learn more about GLOW BATTLE and purchase it online.

Any of you parents created your own physically active Star Wars games? Handstand swamp challenges? Luke’s one-armed pull-up contests like at the end of Empire Strikes Back? Maybe you have been in a Star Wars themed 5K?

Let us know how you celebrate these films with games and activities. The more sweat the better!