Exciting Games to Play at Night 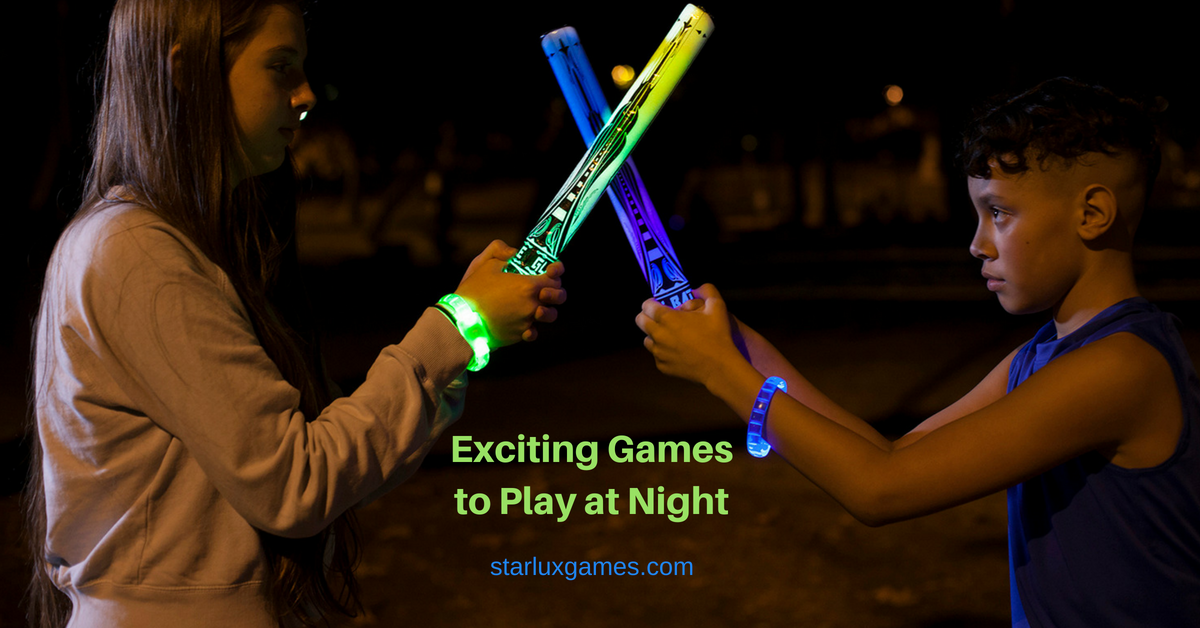 How many people only have fun in the daylight and forget all about games to play at night? Whether they are on a camping trip, vacation, or in their own backyard, the fun does not have to end when the sun goes down. Games are meant to be played at all waking hours when we have free time. And truth be told, many games are a lot more exciting to play at night when it is dark.

But we are not the only ones creating games to play at night. So we rounded up several of the best ones we could find. These games will add to any family or group outing. No sense in burying our faces in the TV after dinner on a vacation trip or a backyard BBQ supper. Light up the night with these fun glow in the dark games.

If your crew loves soccer then they need the chance to play at night. Don’t you think it would be cooler on those 100-degree July days to play after the sun melts into the horizon? We do! Buy a glow in the dark soccer ball and keep the action going when most folks are settling in for a long evening of mind-numbing Facebook scrolling.

*Soccer and other games can fight against tech engineers who get paid to keep us ignoring family and friends in the real world.

If you want a little less running after dinner then maybe soccer is not your first choice. OK, then relax with a casual game of badminton in the dark with glow in the dark birdies (available for purchase on amazon.com). Does anyone even keep score with badminton? I mean besides that insane uncle in every family who likes to spike a volleyball on man, woman, or child!

Have a swimming pool? If yes, playing night time Starlight Swimming Games with their fun glow in the dark waterproof swimming pool game pieces is a must have for kids, teens, and even adults.

Pickleball is as versatile a game as you will find. It can be played virtually anywhere and now we can play anytime with the glow in the dark version (available for purchase on amazon.com).

We doubt playing tackle football is safe at night. Heck, it’s not safe to play during the day if you care about your brain getting rocked on a regular basis. But we will endorse a nice game of glow in the dark flag football. No excuses for dropping a pass because you couldn’t see it after daylight ends. A LED glow in the dark football should be bright enough for any receiver to snag out of the night air.

Some would say ping pong ball shooters are for kids. We disagree! Teens and even adults can get fired up about blasting their buddies with ping pong ball guns. Who knew these even existed? It’s a much cheaper option than paintball and a lot tamer.

For those who are not great at golf, they may find that they really suck at night time glow in the dark golf. Or who knows, they may play better at night. It could even the playing field between them and those with actual golf skills. Either way, glow in the dark golf balls will make for a great time on the driving range, a tournament at sunset, or on a mini-golf course. At the very least, playing in the dark is a good excuse for those who don’t do any better with the lights off.

Are you or your kids a fan of Star Wars and lightsabers? If yes, we have created a very exciting glow in the dark game called GLOW BATTLE that has glowing swords that are made out of a safe soft plastic that makes having epic glow in the dark Star Wars inspired sword battles incredibly fun while being safe. Check out our GLOW BATTLE game here.

Let’s don’t forget volleyball. Playing glow in the dark volleyball on the beach under a full moon is one of the best ways to enjoy this game. Mix in a glow in the dark ball and you have the makings of a three-hour fun-fest next to the sea. Playing under the moon is a lot cooler than sweating it out under a blazing sun. Plus there aren’t as many sun worshipers to watch as a crazy uncle spikes the ball on your head!

If you all know of some more games to play at night, please let us know your favorites. We want to make sure the possibilities are endless when it comes to outdoor games in the dark. There’s no reason not to have a blast at night while burning a few calories at the same time.

Games make for a better day anytime we have the chance to unwind with them. Taking advantage of nighttime neon games ensures we maximize our “funtime” opportunities. The clock is always ticking on the free time we have. We might as well utilize every second in the dark as well as the light.

If you enjoy scary games, check out our blog post on the best scary games for kids.