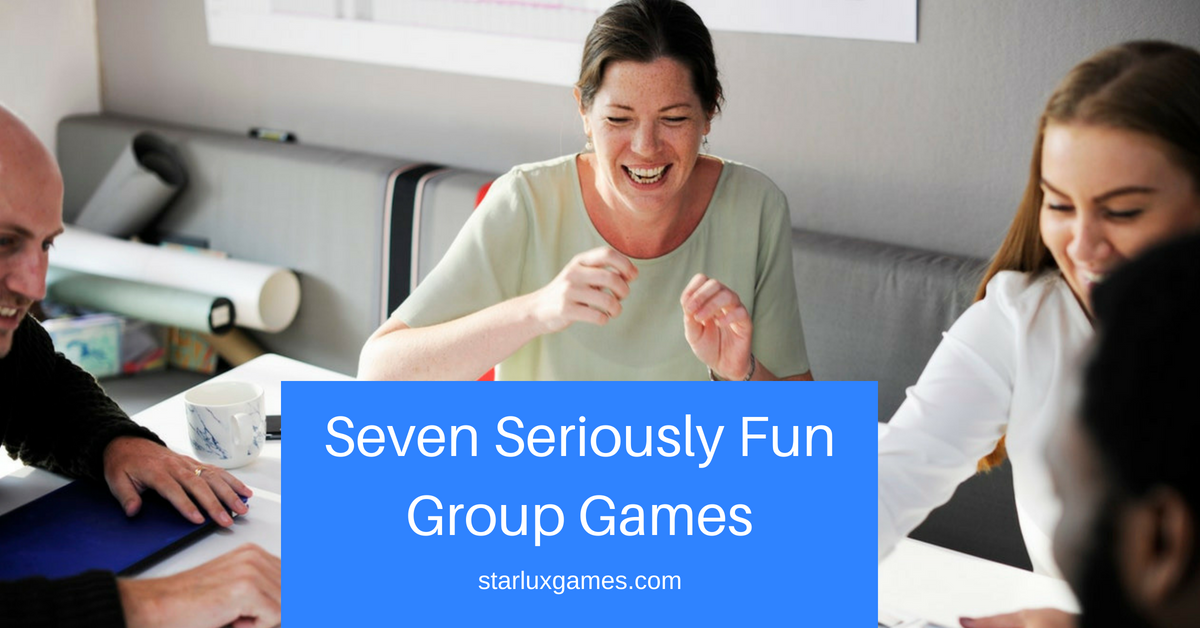 Whether you’re hosting a group event or just going to one, you can be the hero by coming armed with some fun group games. Anytime you’re with a large group of people, things can get awkward and uncomfortable.

You want the folks in the group to mingle and enjoy each other’s company. Supply yourself with an assorted arsenal of activities including games that involve teamwork and some that are more competitive. These seriously fun group games will allow people in the group to loosen up, work with each other, and even end up laughing out loud together.

This fun group game combines parts of your favorite party games and pop culture into one. Each guest writes down the name of 10 celebrities (i.e. Cher, Tiger Woods, Brad Pitt) on slips of paper and puts their slips in a hat. Then, guests divide into two teams and take turns guessing the celebrity that their teammate is acting out.

This game is best suited for smaller groups, around 10-15 people, but is easy to play with more or less. The beautiful thing about Celebrity Charades is that it can be whatever you want to make it. You can choose harder celebrities to act out, play multiple rounds, incorporate props, whatever you’d like to do. This game is sure to get some laughs and engage your guests.

The object of this fun group game is very simple: pick up the prize in the middle of the circle. The prize can be a ten-dollar bill, a concert ticket, or even a small toy if you’re playing with younger children. Easy right? There’s a twist. Everyone in the group has their elbows linked in a circle and is facing away from the prize making it nearly impossible to get it. The group keeps twisting and turning as each player tries to outwit or out-muscle the other players. This exciting game can be versatile as well; change the prizes, add a time limit, and make it your own.

Your favorite group game re-imagined. The premise is the same as the classic Capture the Flag except it’s been revolutionized with glow in dark orbs and futuristic borders marked with LED lights. Both of the “flags” are glowing orbs that the other team tries to steal from enemy territory. The teams wear glowing LED bracelets to differentiate players and use glowing jail markers, a new twist on the traditional game. It’s the perfect way to occupy a group of kids, teenagers and adults and is a ton of fun to play at night. You can even mix it up with 12 game variation cards for more ways to play Capture the Flag and other fun games. Click here to order Capture the Flag REDUX.

This game is the perfect way to get guests mingling at your next party or group event. Each player gets a sheet of 10 stickers that are uniquely their own. For example, one person gets all red stars and one person gets all blue circles. Then, they have to stick them on other players as the night goes on without the other players noticing. If they catch you red-handed, they get to place a sticker on you! The first person to get rid of all their stickers gets a prize from the host of the party. This fun group game is sure to get the guests at your party moving around and talking to each other and is entertaining for all ages.

According to the box, Exploding Kittens is a great group game for “people who are into kittens and explosions and boob wizards and sometimes butts.” Aren’t we all? It’s a crazy description for a really fun game. During the game, players go around the circle drawing cards trying to avoid the Exploding Kitten cards in the stack. Once someone draws one of these super dangerous felines, they are out of the game…unless they have a Defuse card which distracts the kitten from detonating  – think laser pointers, catnip, and belly rubs. There are different game options for different amounts of players, including a Party Pack version for up to 10 players. Watch an instructional video and a sample round of Exploding Kittens, as well as purchase the game here.

It’s hide-and-seek backwards! Perfect for all ages, this game starts when the host secretly tells one of the guests to go hide. Then, the host announces to party group who the missing person is. The party goes on as the guests begin to individually look for the person who’s hiding. When they find the missing person, they hide with him or her until more and more guests join them. Eventually the entire party ends up crammed inside a tiny closet, shower, or even your car. The last person to find the hiding group goes first the next round. This game can be played almost anywhere and is a great way to keep the party interesting.

If you want to get your guests really acquainted with each other quickly, you need to pull out the produce. All you need to play this game are two oranges or apples or something else from the crisper. Two teams get into lines. The first person on the team puts an orange between his or her neck and chin. Without using their hands, they must pass the orange to the next player’s neck and on down the line to try to beat the other team. You can play in a circle or with four teams instead of two. Looking to really make things interesting? Play with weirdly shaped vegetables or fruit like eggplants, avocados, or bananas. May the best chin win!