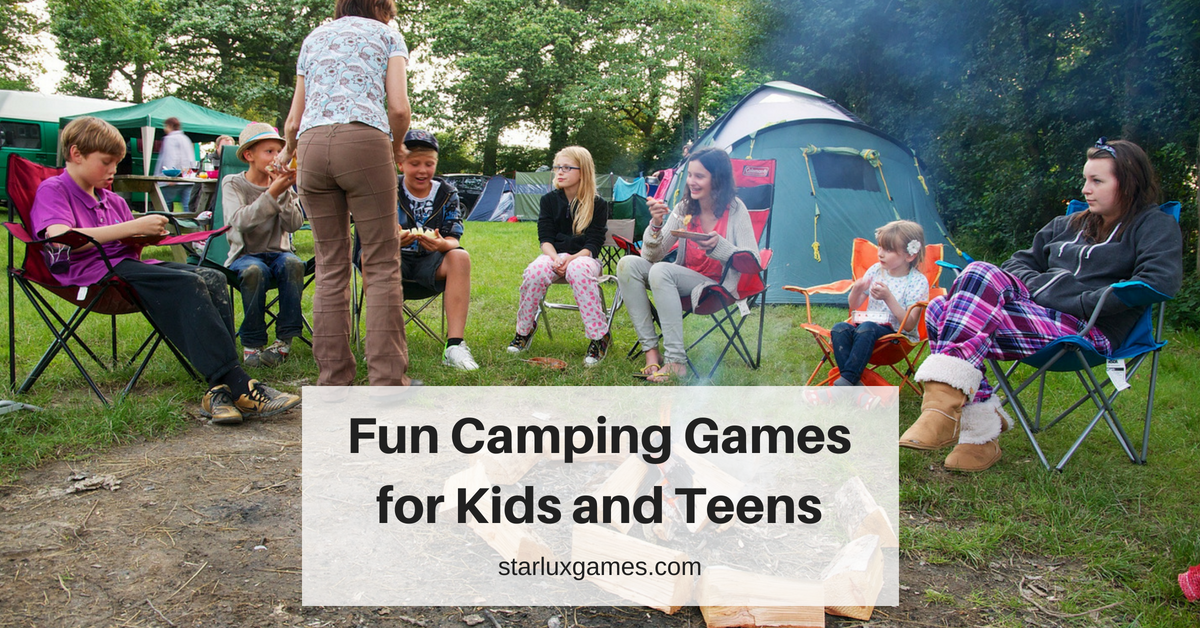 When camping with kids and teens, you can sometimes face the problem of them getting bored, which can turn what you hoped would be a fun family camping trip into a bad camping trip.

In order to keep boredom at bay, it’s nice to have a list of the most fun camping games for kids and teens on hand for your next camping trip. Seasoned campers know how to keep kids and teens entertained and busy. Having them set up the tent, stack firewood, and hook up the water lines is a good start in my book.

For parents who are new to camping, you may need some games at the ready to keep the kids engaged in the Great Outdoors. The last thing you want is your kids sulking about their lack of wifi.

A good way to get everyone involved in some physical play is Camp Olympics. No need to add weird sports like curling or pole vaulting. Stick with foot races, long jumps, swimming contests, and even some wrestling. These Summer or Winter Olympics can be used yearly to track record setters for years to come. Not a bad addition to the family history books that mom keeps.

Kayaking seems to be getting more and more popular each year at various lakes. Teenagers would love to challenge their parents in a Kayak Race or Lake Cleanup Contest. For cleanups, players compete to see who gathers the most lake litter in an hour or two. The races could be sprints from one side of the lake to the other. Or for athletic families, an endurance race around the entire lake would be awesome. You might want to track the kids on a GPS. They are pretty crafty and could take a shortcut. Same goes for you kids… watch Dad, he hates to lose!

How about a Fishing Tournament? And don’t keep this game to yourselves. Have the kids invite neighboring campers over for the tournament. The winner could win a cash prize or get to skip any part of the packing up chores when the camping trip is over. The winner is the fisherman with the most pounds or the largest number of fish overall. Use those kayaks or do some casual bank fishing.

Rescue the Rookie Campers may be a game I just made up. However, it is a good challenge. Trust me, somewhere near your campsite will be a rookie camper with no clue how to start a fire. The poor guy probably didn’t even bring any firewood, much less kindling. So your mission as a family is to seek out the rookie and offer him some wood and let your kids start the fire. I had a Boy Scout Troop start a fire for me and my young family back in the day. Not a proud moment personally, but I appreciated them and eventually learned how to start a fire… all by myself!

Capture the Flag is always a go-to game for all ages no matter where you are. It’s definitely one of the best outdoor camping games. You can even play after those memorable sunsets with Capture the Flag REDUX, our glow in the dark version of Capture the Flag. This game is great for larger groups so this is a perfect opportunity to make new friends with other campers. Don’t let the kids be shy. Have them invite other junior campers over for a big game of Capture the Flag.

Whether you need a game for the day or a week-long challenge, Scavenger Hunts never get old. How many items could you find over the course of a week at a campground? I’d say 50-100 if you want to make things interesting. Better watch mom. She’s prepared for everything, so she may have half of the items already in her bag!

Some honorable mentions for the best outdoor camping games include:

Keep this list of games handy as you head out for your next camping trip. Getting active and competitive with your sons and daughters will make them forget about the lack of wifi out in the woods. It doesn’t hurt us adults to forget the internet world for a while either!

If the campground you are going to has a public swimming pool, check out our fun glow in the dark swimming games.

* The featured image for this blog post was taken by Martin Thomas and can be found here on Flickr.