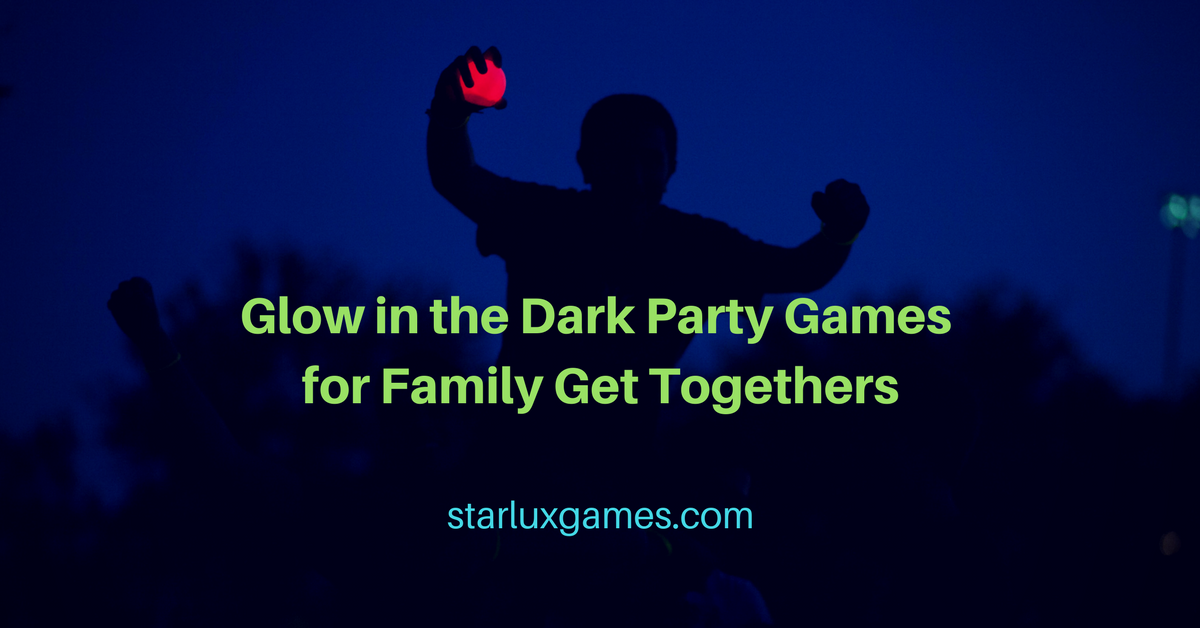 Sometimes family parties can turn into all-day events, so it pays to be prepared with some fun glow in the dark party games. Just because the sunlight fades, that doesn’t mean the party has to fade, too. The best family glow games are ones that work for all ages – kids, teens and even adults. Keep these festive glow in the dark party games in mind the next time you invite your relatives over for a holiday party, birthday party or family get-together.

This Bocce set was made to play after the sun goes down. Great for the backyard, beach or campsite, the balls are made from a durable plastic that is translucent so the LED light shines through making them glow in the dark. Give them a toss and you can still easily see them from 100 feet away. The set includes eight glowing bocce balls – two green, two blue, two red, and two yellow, as well as one glowing jack and a nylon carrying case. It also includes batteries, instructions and, most importantly, a tape measure so there are no family feuds over who won the game. http://www.playaboule.com/Glo_Petanque_set.aspx

How low can you go when you limbo with the family? This is a fun glowing game that will bring lots of laughs. First, put on some upbeat, family-friendly music. Next, find a flashlight and turn out the lights. Then, hold the flashlight so the beam shoots out horizontally. That’s when the limbo begins. Challenge participants to limbo under the light without running into the beam. When everyone has gone under it once, then lower the beam for the next round. When someone gets hit by the beam, he or she is out. The last person standing is the Glow Limbo Champion.

To score big at your next family party, grab this LED lit ball for a fun glow in the dark party game of flag football. This durable LED football features 2 bright red LED’s built right in with a timer that will trigger any time the ball is kicked. Each ball comes with an inflator needle, two LED light modules, two round rubber light covers, and installation tool and instructions. Batteries are replaceable with 3 – AG13 button batteries. https://www.windycitynovelties.com/led-football.html.

4. GLOW IN THE DARK WATER BALLOONS

On a hot summer night, make a big splash with glow in the dark water balloons. They are so easy to make and so fun to throw. Simply activate some mini glow sticks, insert one into each balloon and fill the balloon with water. All aged family members can get into the action of a fun night water balloon fight!

It’s the classic Capture the Flag game revolutionized with futuristic glow in the dark lights. The whole family will be entertained as they break teammates out of jail, sneak into enemy territory, protect base and steal the glowing flag to win. Each game box includes two glowing orbs to use as the “flags,” color-coded LED bracelets to differentiate team members, glowing jail markers, and a rule-book. As an extra bonus, each kit includes 12 game variation cards that offer even more ways to play Capture the Flag, as well as other games. Available for purchase here.

6. GLOWING GHOST IN THE GRAVEYARD

The game from your childhood is back and better than ever when played at night with glow sticks. Designate a base and then give one person – the ghost – a colored glow stick to wear. The ghost goes to hide while the other players count to 40. Then, the players go and look for the ghost’s hiding place. The first player to find the hiding spot yells, “Ghost in the Graveyard,” to alert the other players. The first player who found the ghost is safe. All of the other players try to run back to base without getting tagged by the ghost. The person who gets tagged first is the ghost for the next round.

RingStix is a fun and fast outdoor party game that will get the whole family up and moving. Each player uses two specially designed sticks to propel the glowing ring toward the other player. The catching player then uses the end of one or both of the sticks to catch the flying ring. Then repeat back and forth, keeping score or doing tricks. You can play solo or in groups of two or more. It allows you to be as active as you want, flinging the ring for long distances or passing it leisurely at short distances. It may become a favorite family party game. Find it at http://www.ringstix.com.

When you want to play an old classic, just add some glow in the dark components to amp up the fun. For example you can play nighttime neon golf by setting up a nighttime golf tournament. See instructions and equipment at at https://glowproducts.com/us/nightgolf#golfsetup. For another classic glow in the dark party game, order some LED badminton shuttlecocks from https://glowproducts.com/us/glowing-badminton-birdies. Everyone will have fun using their night vision to win these classic games.

Lawn darts has always been a popular game for family reunions and get-togethers. A glow-in-the-dark version just makes it that much more fun. The Funsparks set is made with safe rubbery plastic round weighted tips that you toss at the glowing target ring. The objective is to be the first team, or player, to score 21 points. The set includes 4 glowing darts, 2 glowing target rings, 1 carry bag and instructions. Available for purchase at http://funsparks.com/lawn-darts/.

Bop ‘til you drop in these light-up human bumper balls. The fun begins the minute you step inside the colorful, confetti-filled Bright Lights BBOP (Buddy Bounce Outdoor Play) ball. Then, run and bump other BBOPs. They more you bump, the more the balls’ motion-activated LEDs and colorful foil confetti light up. It’s wacky family fun! Available at http://www.hearthsong.com/bright-lights-bbopand174;.htm