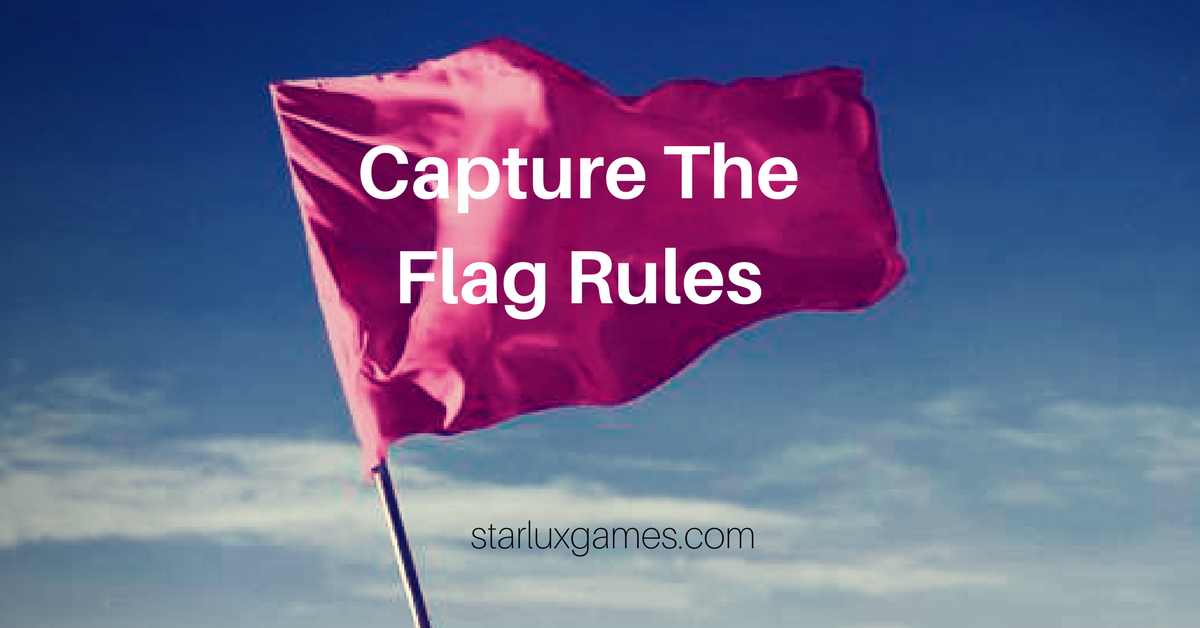 Knowing all the Capture the Flag rules will make this game fun for all involved and remove the possibility of confusion while playing. Believe it or not, you can still enjoy loads of thrilling gameplay while staying within the rules. Even the UFC has a few rules to keep things somewhat controlled.

If you do not know how to play this game, here is an article we wrote on how to play Capture the Flag.

There are many variations of Capture the Flag. So we will lay out the basic rules then point out some that apply to different types of gameplay or setup.

Teams: You want to have an equal number of players on each team. Ideally, each team will have at least four players so the game is more interesting. Games with larger teams are even more fun and will require a larger area to play within. Smaller groups make it easy to recognize who is on which team. Larger teams need some way to show their team colors. Colored bandanas, caps, or even painters tape can be used to show which team each player is on.

Field: The playing area should be divided in half. Try to divide the field so the terrain is as equal as possible on both sides. Use rope, tape, or a natural border to divide your side of the field from the enemy team. Mark off a jail on each side. Both jails should be equal distances from the center line you marked. Jails hold players who get tagged while in enemy territory.

*If your playing area has natural boundaries like a fence or forest line, use that. If not you need to mark the areas that players cannot enter. If they go out of bounds they need to be sent to jail since that is basically cheating.

The Flag: The object of the game is to snatch the flag from enemy territory then bring it back to your side of the playing field. But if you get tagged in the process, you must drop the flag then and there. Each team hides a flag before the game begins. Be as sneaky as possible, but you cannot hide the flag under anything so that it’s not visible at all. Don’t try tying it down so it is hard to snatch on the run either. If you see the enemy team with a shovel to begin the game, somebody is cheating!

The game will never end if teams can camp right beside the flag they are defending. So a general rule is to create a buffer zone around each flag of about 15 feet. Teams cannot stand closer than that to their flag until an enemy player grabs it, then defenders can try to tag the attacker.

Jail: This is where you get sent if you are tagged by the enemy while trying to steal their flag and win the game. Going to jail sounds bad, but after a few hours of playing this rowdy game, you might enjoy a breather! And the good news is that Capture the Flag rules allow for early release… if your teammates can tag you in a daring jailbreak.

*Some variations can be created with the jail rules. Decide before the game if your team can free several of their team members from jail at once or one at a time. Also, set the rule up about how a freed jailbird must act right after release – can they walk safely back to their territory? Or can they be tagged again by the enemy as soon as they step out of the jail?

Capture the Flag is simple and fun. The rules above are not hard to follow and the rules make for a more organized game. Don’t wait until after the game begins to talk over the rules. That could result in the type of quarrels seen in 4-hour Monopoly battles that end with families not speaking to one another for days!

Before we wrap up, here are a few more rules to consider when mixing things up a bit or using different objects for the flag.

Playing this game with the right Capture the Flag rules is sure to make it better for everyone involved. The last thing you need is a controversy at the end of the game with no ref to clear things up. Let’s leave that unorganized nonsense to pro wrestling.