The top 10 Star Wars roleplaying games for kids and teens 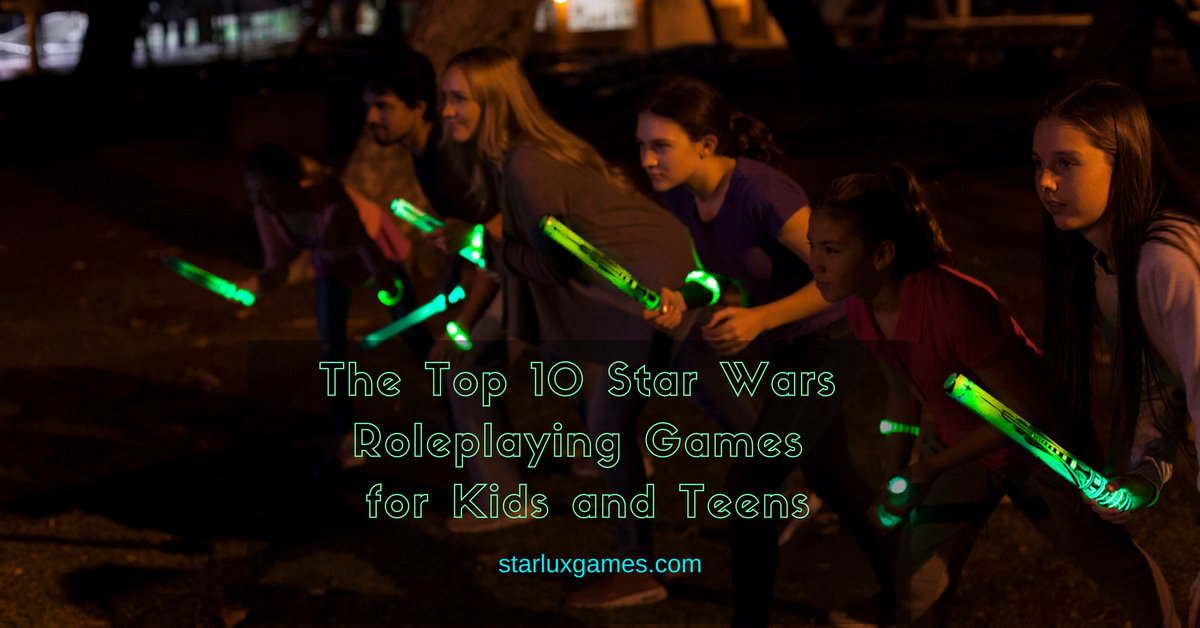 The reason so many kids and adults enjoy Star Wars roleplaying games (RPGs) is because they get to write the story in their own way. No need for debates about who would win a battle between Darth Vader and Rey. With RPGs, you can become Rey and take on your friend playing the role of the evil Vader. The outcome is based on your skills and how you use the Force.

Since no one has the patience to wait for each new episode of the Star Wars saga to be released (Solo: A Star Wars Story comes out on May 25, 2018), role playing games help us pass the time. So to fill your rebel void, we searched the galaxy for the top 10 Star Wars roleplaying games. Some of these games can be purchased and some are for do-it-yourselfers.

This creative little game is great for kid parties. It’s simple and only requires some water guns and a Han Solo action figure. If any of you have a life-sized version of this action figure, we’d love to see a picture of it! You set the game up by freezing the action figure in a rectangular container, then let the kids shoot the ice block with their water guns to eventually free Han. Make it a race by using multiple frozen containers. The kids can be any character they want but choosing one with great aim would be wise.

(30th-anniversary-edition) – This tabletop RPG is not just for fan fun. It has had a big impact on the Star Wars films that came after the original three movies. Funny how games can change the course of history as they allow for more creative minds to enter the fray. This is the Force at work my friends!

A foot race may be the purest form of competition known to mankind. Disney lures runners from both sides of the Force from all over the country to compete in their Star Wars themed fun runs. Fiery athletes who try to break records show up dressed like Boba Fett. While more casual runners on vacation at the theme park might just wear a Wookie t-shirt and log a mile a day in a segmented run. This is the one game that awards unique medals for every participant.

If you know a teacher then you have heard stories of low funding for their class activities. Well, they have to use their imagination and in this case their apparent love for Star Wars spaceships. The kids seem to enjoy the game as they toss balls into the “spaceships.” It would be cool to see the mats decorated up like the Millenium Falcon or the Death Star. Teachers like this would be a good choice to send one of our glow in the dark Glow Battle game sets so she could enhance her P.E. classes with even more realistic Star Wars battles.

Remember part of Luke Skywalker’s Jedi training with the laser shooting floating balls? He was pretty terrible at the beginning. But he improved and eventually became a Jedi Master who drove Kylo Ren completely mad in The Last Jedi. Check out the link above to add lots of Star Wars roleplaying game options for a kids party or group activity. Smash the floating bubbles with your light saber as Rey, Luke, Kylo, or Obi-Wan.

You think Disney has the financial power to create the perfect LARPing (live-action roleplaying game) location for Star Wars fanatics? No doubt right!  This project won’t be ready for a couple more years, but we can’t wait to see it materialize. According to reports fans will be able to interact in stories and gaze at amazing worlds created as a view from starships.

Guess what? It rains sometimes. That means that you can’t always get outdoors to play real-life Star Wars roleplaying games. No problem. On stormy days you can battle the kiddos on the Xbox in Battlefront II. The story is huge, and you get to be one of many characters and interact with your favorite film characters. Parents, make sure to loosen up those fingers before playing. Your offspring’s hand/eye coordination will make you look silly if you go into the game stiff.

Jedi Knights come to a Lego reality in this classic game that uses pieces from Episode V. The Emperor was a master chess player, in it for the long haul. Kylo Ren is too impulsive and would likely destroy the board after a couple bad moves on his part.

Here’s another epic game from Fantasy Flight Games. It’s a dice-based game with a thick rule book. This game has a lot to do with luck but also your choices. You can advance using Dark Side tactics… but is it worth it in the end? The rulebook features an older Obi-Wan and the menacing Darth Vader on the cover.

This game gets down and dirty as it’s played at a Seattle campground twice a year. The time frame for the gameplay is five years after Revenge of the Sith. This event caters to new LARPers as well as seasoned roleplaying gamers. It’s a great way to get into Star Wars roleplaying games while meeting new folks in a cool city.

No worries if you can’t make it to the Great Northwest. Who’s to stop you from creating your own Star Wars RPG at a local campground? Trust us. There are plenty of diehard fans who would love an event like this and would join up in a heartbeat. If you have to, lure them in with a Glow Battle Game Kit. It will make the event more appealing since you can play at night and with our glow in the dark game pieces that make Star Wars role-playing games come to life and feel very real.

Do you know of any other cool Star Wars role-playing games for kids, teens, or adults? If yes, please add them in the comments section and thank you!